A Life-changing Cup of Coffee 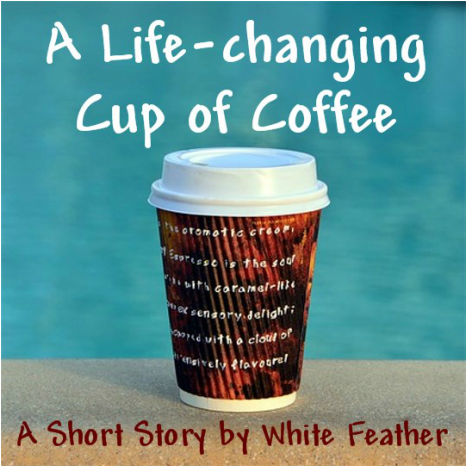 Roger had just left the office and was headed for the parking lot. Glancing at the digital bank thermometer across the street he saw that it was 12 degrees Fahrenheit. He had on his heavy coat, a shawl and his expensive leather gloves yet he was shivering. The parking lot was a block away and he mentally calculated how long it would take to walk to his car and how long before the car's heater would kick in. He abruptly interrupted his walk by entering the coffee shop at the end of the block just before the parking lot.

Once inside his glasses immediately fogged over. First taking off his gloves, he then took off his glasses. Looking around he saw that the coffee shop was completely empty of customers. He knew they were about to close for the day. He never came in at this time in the late afternoon but he came here every morning for his daily cappuccino which he took to his office to start his work day. It was very different coming into the coffee shop at the end of the business day instead of the beginning.

Feeling himself quickly warming up, Roger walked slowly up to the counter. Without his glasses he could not see very well. Reaching the counter he put his glasses back on but they were still fogged up so he took them right back off.

The only employee in sight, Nicholas came up to the counter to greet him, "What'll it be, Roger?"

Roger didn't need his glasses to know what Nicholas looked like. He was an older man; perhaps the oldest employee at the coffee shop. He had long salt and pepper hair that was tied back in a ponytail and a neatly trimmed salt and pepper beard. He was missing a tooth but always had a sparkle in his eye and always greeted him by name. He made the best cappuccinos of anyone on the staff.

"I'll take the usual," said Roger as he, once again, put on his glasses. They were almost clear now.

"I've never seen you in at this time of day," said Nicholas as he began preparing Roger's cappuccino.

"Yes, well it's so freaking cold out that I wasn't sure if I could make it to the parking lot without something warm to drink. After the rotten day I've had I could use something to pick me up."

As Nicholas began preparing the cappuccino he said, "So what's wrong?"

At first, Roger was irritated that this coffee jockey would ask something personal. Then, for a reason he could not understand, he blurted out, "What's wrong is that I've got one of the best-paying jobs in town and I'm not happy. I'm looking for a better opportunity but there aren't any in this town. I'm deathly afraid that this is the very best I can do in this freaking town." He suddenly clammed up realizing that he had just revealed his personal situation to a lowly coffee jockey.

Finishing the cappuccino and putting a lid on it (he never asked if it was to go), Nicholas brought the cup over to the counter but kept it in his hand, "Opportunity is like sunshine."

After a long moment of silence Nicholas spoke up, "When you find yourself in a dark room seeing no way out you can do two things. You can open the windows to let the sunshine in or you can go outside and rip your shirt off, feeling the sunshine on your skin. It helps to open up to the sunshine but it's even better to engage it with all your being. Sunshine is unlimited, as are opportunities. How do you engage the sunshine? On a cloudy day have you ever ordained the sun to come out?"

Roger was speechless. He finally asked, "Ordained? I'm not some freaking priest or something."

"To ordain is to decree, command or enact. It is all of our power to do so. You don't have to be a priest or president or pope. You're a divine human being. Ordain what you want. The universe....and the sun....have no choice but to oblige."

"So all I have to do is ordain new opportunities?"

Waving his arm around, Roger replied, "So this is what you ordained? A job making coffee for people?"
Roger turned his head to the side, "I told the universe that I wanted to help people. The opportunity of this job came up and I accepted. Now that I've helped you, what I ordained has come true and tomorrow I can give my two weeks' notice. I also ordained that I would win the lottery so when I get off work today I will go home and start packing so that I can move to a better apartment."

Nicholas put the cappuccino on the counter, "That'll be ten bucks."

Roger threw a twenty dollar bill on the counter, "Keep the change."

On the way to his car Roger was oblivious to the cold. The next day at work he gave his two-week notice.