A Tale of Two White Christmases 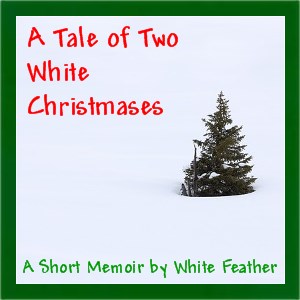 My first white Christmas memory goes back to either first or second grade. The family was living at the desert army base in southern New Mexico. During the four years that we lived there we only saw snow one time and that one time happened to be on Christmas Eve. Everyone in the neighborhood was standing outside looking at the snow. They had their heads back and arms out, feeling the snow land on them. It never stuck to the ground but it was coming down pretty good for about half an hour. Technically, since this early experience with snow occurred on Christmas Eve, it doesn't quite qualify as a white Christmas but I'm counting it just because I can remember it and because it was my first memory of snow. The joy and excitement everyone was feeling is a big part of that memory.

It was a few years later that I had a very different experience with a white Christmas. The family was now living in Maryland. My siblings and I were raised as Roman Catholics even though our mother refused to step foot inside a church. Our father only went to church once a year and that was on Christmas.

After our Christmas Eve dinner my father, my brother and I got dressed up to go to church. The sisters and their mother stayed home. There was about an inch or two of snow on the ground from a snowstorm that had just recently started. Instead of driving to the church, which was on the army base, from our house which was in the adjacent town, my dad decided to call a taxi.

So we went to church in a taxi! How can a child not remember that? Of course, I was in fourth or fifth grade at the time and I remember a lot. I think it was the very first time I ever rode in a cab.

We were three of only about ten or eleven people who showed up for mass. I had never seen the church so empty. While the priest blabbered on, his monotone voice echoing through the empty church, I was thinking about the presents under the tree back home with my name on it.

When we came out of the church there was a good foot of snow on the ground and it was coming down very heavily. Our dad called the taxi company but they had ceased operations due to the storm. Bundling us up, he told us we would have to walk home. It is hard to calculate miles when you're a young kid but I have actually been back there as an adult and I calculated the distance to be around seven miles.

So my brother and I and our father walked for seven miles through a howling snowstorm. There were times when I was not sure we were going to make it. I kept thinking about the Donner Party crossing the Sierra Nevada, which I had just learned about in school. But we trudged on.

Eventually, my brother and I realized that the best place to walk was right behind our father. It was hard work walking through snow that was getting deeper by the minute. With our father as snowplow, my brother and I had a partially clear path. I was last so I had the clearest path.

What I remember most was the adventure of it. It was truly exciting heroically battling the elements in a quest to reach home in time for Christmas to start. It was bitterly cold but fueled by thoughts of the warmth of Christmas and by our father's encouraging words, I kept walking through the snow.
And walking and walking and walking. I slept deeply that night.

The very first thing I did the next morning on Christmas Day was look out the window. The snowstorm had raged through the night and now there was almost three feet of snow on the ground. I played in the snow for probably around four hours on Christmas Day. My mother finally had to come get me to keep me from getting frostbite and hypothermia.

Curiously, I remember the heroic walk through the blizzard and I remember making ice forts and snow men the next day but I cannot for the life of me remember what I got for Christmas that year.