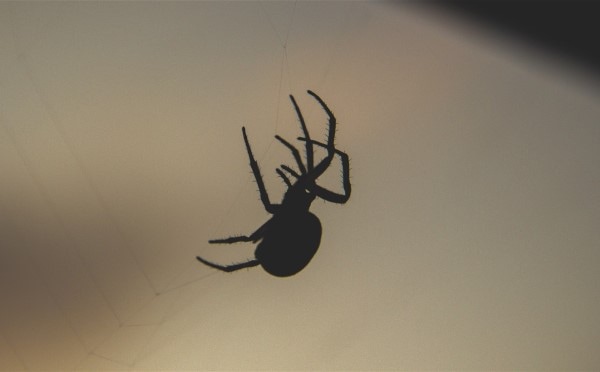 I lived in a house once that had a brown recluse spider living in one of the window wells. (Brown recluses are even more poisonous than black widows.) I lived with that spider for eight months until I moved. I refused to kill it. Killing spiders is bad mojo; I don’t care how many females are screaming.
Spiders have a communications network called, ‘The Web.’ It is much more efficient than the internet. You kill one spider and suddenly every spider on the planet knows about it and you are suddenly a murderer in the eyes of every spider from then on. I swear, they know! Black widows have actually crawled on me without biting me. I swear they really do know. They can sense your feelings towards them. So I bless every spider I see and I do not kill them or hurt them. I treat them with great respect.

I had a conversation with a spider once. I was sitting in the passenger seat of a pickup truck while waiting for the driver (my co-worker) who had gone out into the forest to relieve himself. Suddenly, a little spider came floating down from the ceiling of the truck’s cab. It was hanging onto a silky thread. Just about a foot in front of my face, the spider stopped its downward descent and turned to look at me. It stopped all the movement of its many legs and said to me, “You’re that guy I heard about on The Web, aren’t you? You’re the one who refuses to kill spiders.”

“I am honored to meet you,” replied the spider. “I have noticed that human men and women have something in common.” The spider fell silent, apparently waiting for a reply.

“Well, yes. You both are scared to death of spiders!” The spider then laughed — although it is beyond me to describe a spider’s laugh. (It sounds kind of like cellophane tearing off of rotten fruit and it looks kind of like Dolly Parton riding a mechanical bull.)

Like a manic-depressive on a bungie chord, the spider bounced up and down as it laughed. Finally, it continued, “The difference between human males and human females, besides what planet you’re from, is in how you react to fear. The males react by killing us and the females react by screaming like banshees.”

The bungie action intensified but I came back with a quick retort, “Wait a minute! I happen to know there are plenty of human females who have no problem quickly killing a spider and, lord knows, there are males who scream like banshees when they see a spider.”

“Yes,” replied the spider, “but we spiders can’t see your purses and beards and breasts and fashion and attitudes and prejudices and phallic symbolism or your genitals; all the things that determine gender to those larger creatures with bigger eyes. We react to light but we also react to feeling vibrations. The predominant feeling vibration that we detect coming from humans is fear. Over the course of hundreds of thousands of years we have learned that humans react to fear in two ways; they kill or they scream like banshees. After so many years of experience we have decided this is gender related and it is the only way we can tell what gender you are.”

(I began wondering, ever so briefly, how one determines the gender of a spider.)

The spider continued, “But when a human comes to us and they are not in fear then we can’t tell what gender they are. It is such a rare occurrence that we are at first confused. But then, from thousands of years of genetic memory, we remember that there is also the human feeling known as love. There have been just enough humans over the course of time who have shown us spiders just enough love for that to have been imprinted on our mass consciousness. It is always a joy to find humans like that. But, dang it, when you guys are in the love vibration we just can’t tell what gender you are! So tell me, White Feather, what gender are you?”

I was suddenly thrown into a state of utter confusion. For a brief moment I had no idea what gender I was. I entered a fleeting moment of complete genderlessness. It was like I had stepped completely out of my identity. I actually looked down at my crotch and thought briefly of opening my jeans to verify my gender but then suddenly the door to the cab of the truck opened and Greg slipped into the seat behind the steering wheel.

“Boy howdy! What a relief that was. I just watered half the forest.” Greg turned the key in the ignition to start the truck.

I looked back at the spider but it was gone.