Annie and the Train 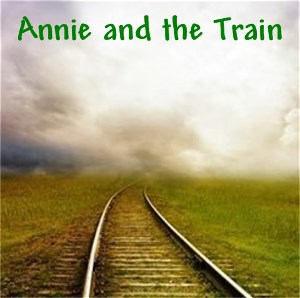 From the age of four to the age of fourteen Annie lived in a house that abutted to the railroad tracks. When she was indoors when a train passed the entire house vibrated. She remembered looking at her mother's houseplants as they shook while the train passed. She could feel the vibrations passing through everything in the house, including her own body.

When she was out in the backyard playing when a train passed, her mother would immediately open the back door to check on her children. Annie had been told a thousand times to stay in the yard and not go near the railroad tracks.

She remembered that time a train passed by while she was playing in the backyard. Her mother came out of the back door and became hysterical when she did not see Donnie, Annie's younger brother. Her mother came running out into the backyard screaming Donnie's name. Of course, she could barely be heard over the passing train. She screamed and screamed. Annie could feel fear coursing through her body even though she knew Donnie was in the garden at the side of the house eating snow peas off the vine, as he was want to do.

The memories were vivid in Annie's mind as she stood on the train platform at the age of forty-three. She had never been on a train in her entire life but her mind was full of memories involving trains. She tried to push the memories out of her mind because she was traveling to a place she had always fantasized about visiting. She knew that the train would be taking her to a new life; one that was surely very different than the forty-three years she had been living in the same town.

Boarding the train, she found her seat and put her baggage in the appropriate place. Sitting next to the window, her heart felt like it was coming up her throat. She was nervous and excited at the same time.

As the train began moving she looked out the window fully expecting to see the backyard of her youth when her mother came rushing out the back door. She saw numerous backyards and then the view out the window changed as it rushed by her. She continued staring out the window and as she did the past seemed to evaporate. Her memories gave way to new scenery.