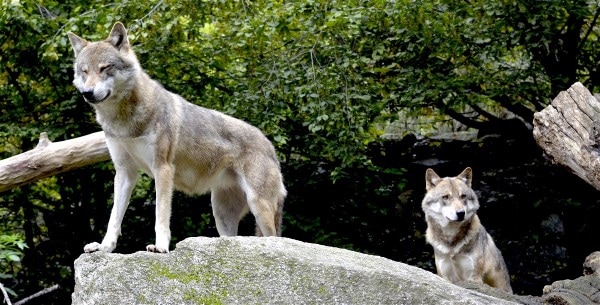 My beloved daughter was just a little over one year old when she had her encounter with wolves. I had taken her to a wolf sanctuary where I knew one of the workers named Pamela.

We were standing at the gate to a chain link enclosure while Pamela fumbled with a key ring holding a large number of keys. She was looking for the key that fit the lock on the gate.

While she fumbled with the keys I looked inside the enclosure. Back from the center of the enclosure was a mound of moving fur. At one end of the mound was a large stationary head of an adult wolf. At the other end was a tail. In the middle were seemingly countless wolf cubs climbing over their mother’s belly fighting over teats.

“We like to call this enclosure our maternity ward. And it looks like it’s feeding time.” Pamela tried a key that did not work so she continued fumbling through the key ring, “The mother’s name is Ska Winan, which in Lakota means, ‘Woman of the North.’ This is her second litter. She had them about a month ago.”

I looked at Pamela, “Ska Winan won’t mind if we play with her babies?”

“She won’t mind if your baby plays with them. It’s probably best if you just sit off to the side and watch. Ska Winan is probably the gentlest of all our wolves but she’s still a mama with the instinct to protect her babies. You she might see as a threat but your little girl is just something for her babies to play with.”

Pamela finally found the right key and opened the gate. With my baby girl in my arms, I stepped inside the closure as did Pamela, who then closed the gate behind us.

“Well, just put your little girl down on the ground in the center of the enclosure then go sit against the fencing over there where Ska Winan can keep an eye on you.”

I was a very protective father and must admit that I was a little nervous setting my daughter down on the ground in the middle of an enclosure that held a full-grown gray wolf and her 9 cubs. Was I crazy?

But I did as instructed and placed my baby on the ground then sat down at the side of the enclosure where Ska Winan could see me. Looking at her I saw that she was staring very intently at me. But she did not move.

The 9 cubs, however, quickly disengaged from their mother’s teats and commenced to attack my little girl.

My daughter was quickly giggling uncontrollably as the 9 little balls of fur jumped all over her, licking her and prodding her with their little noses.

I looked briefly at Ska Winan who had not moved an inch, her one hind leg still protruding in the air to reveal her sagging teats. She looked exhausted.

I then watched my daughter play with 9 wolf cubs for the next 15 minutes. They were rough but they were loving and my daughter never stopped giggling as the cubs climbed all over her. It was one of the most moving and wonderful things I’ve ever witnessed in my life. My daughter, of course, was too young to remember it but it is a memory I will always carry with me. I was engulfed with joy at the spectacle.
It was impossible to tell who was having more fun; my daughter or the wolf cubs.

Eventually, Pamela, who had been standing off in the corner of the enclosure, waved to get my attention. Turning to look at her I saw that she was pointing at her watch. I very slowly and carefully stood up.

Apparently, Ska Winan had fallen asleep but when I stood up she abruptly raised her big head while simultaneously dropping the hind leg that had remained sticking up in the air while she napped. She did not move beyond that but she kept her stare affixed on me.

I gingerly walked to the center of the enclosure. Bending down I petted one of the cubs. Ska Winan rose up an inch or two. Sorry Ska Winan, I thought. I just could not resist petting one of those cute cuddly balls of fur.

I then picked up my daughter. She was sopping wet. Her short wispy blonde baby hair was wet and matted down onto her head. Her face was wet with wolf saliva as was her clothes. That is when I had the thought that this was a little like a baptism, except instead of being dipped in holy water, my daughter was doused with wolf cub saliva.

My daughter was still giggling and waving her arms as she looked down at the wolf cubs at my feet. I walked to the enclosure gate where Pamela was standing and the little horde of wolf cubs followed at my feet.

“It’s gonna take a bit of diversion for us to get out of here,” said Pamela as she fished through her pants pocket. She pulled out a small white plastic ball and threw it in the direction away from the gate. Simultaneously, all 9 cubs went running after the ball while my baby and I, along with Pamela, slipped out of the enclosure.

While Pamela locked the gate I stared through the chain link fencing at Ska Winan and her babies. My baby daughter was still giggling and waving her arms. She obviously wanted to stay and play some more with her new friends.

I noticed a couple of scratches on her arms and one on her cheek. But they were very superficial and surely would not scar. My girl seemed oblivious to them. I felt so much joy holding her in my arms. I was a very happy daddy.

My daughter had just been anointed with wolf mojo. It was my daughter’s very first encounter with wolves but it most certainly would not be her last.

Before turning to leave I looked through the fencing again at Ska Winan. She was still staring directly at me. I smiled then said aloud to her, “Pilamaya.” (The Lakota word for ‘thank you.’)