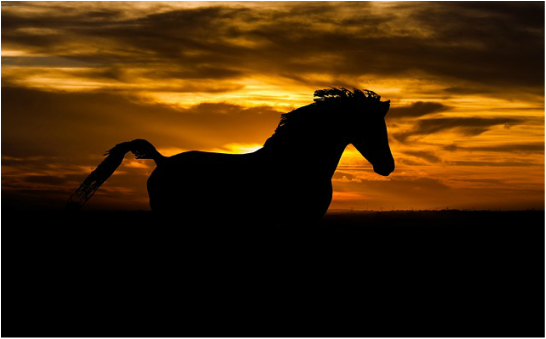 If you have ever been to Nebraska you know there are stretches of prairie that are endlessly flat. But there are also large stretches of prairie that are undulating. The prairie will slowly rise up in a hill and then descend into a little valley and then rise up again in a hill. This undulation continues for many miles in some places. It is like the land is an ocean with large waves flowing through it.

Crazy Horse would challenge other Lakota warriors to races across these undulating prairies. The other warriors would not get off their horses but rather run at full speed the entire distance of the race. Even though Crazy Horse got off his horse regularly and walked, he won every race. No one could outrace him over these undulating prairies, no matter how fast their horses were. At the end of the races, the other warriors' horses were thoroughly exhausted and in need of extended rest. Crazy Horse, though, would immediately commence another race back in the direction he had come. And he would win that race too; despite the fact the other warrior had a fresh horse.

Did Crazy Horse have some "special" knowledge of crescendos and diminuendos? It seemed he worked opposite the crescendos and diminuendos of the land. When the land was going down he sped up. And when the land was going up he slowed down. To go at a constant full speed over flat land made sense, but not over undulating land. He was deeply aware and connected to the land and rode accordingly. He was also deeply aware and connected to his horse and knew how to work with his horse to get maximum speed and distance without wearing the horse out.

Crazy Horse knew how to go with the flow. When being chased, he was very appreciative and grateful to see the undulating prairie, for he knew how to use the undulations to his advantage. His appreciation of the land that he was so intimately connected to enabled him to fly. Without that appreciation he would have been caught a hundred times.