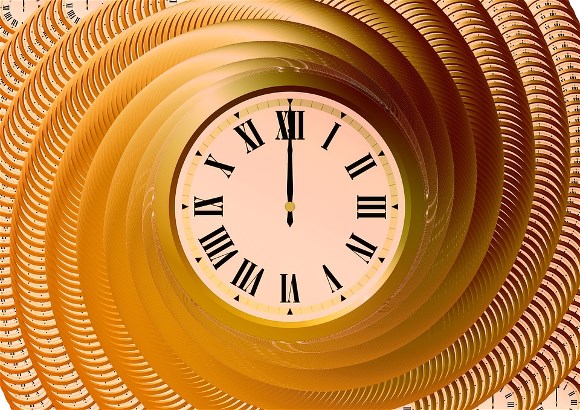 Wilma had dozens of cuckoo clocks in her apartment. They were all meticulously synchronized with each other and they all went off simultaneously at the top of each hour. Where ever she was in the apartment, she had only to turn her head slightly to see the time. It seemed to Wilma that she had spent most of her life watching the clocks.

Back when she was young and newly married she spent a lot of solitary nights watching the clocks as she waited for her husband to come home from work. Then there was that god-awful night when he never did come home. It did not seem like that many years later that Wilma was watching the clocks as she waited for her daughter to come home from dates. She simply could not go to bed until she knew her daughter was safely home. Of course, the day eventually came when her daughter did not come home, either.

Wilma fixed herself a cup of coffee and sat down in her chair in the living room. Her husband’s chair was next to hers; empty as it had been for years now. As the ticking of clocks echoed through the room, she allowed herself to remember those few happy years when her daughter was still young and her husband was still around. When they were home and filling the house with their laughter and talking, Wilma took no notice of the clocks, but when they were gone all she could do was keep looking at the clocks until her family came home. Now that they were both gone, Wilma had nothing left in her life but the clocks.

After thinking about her loneliness for a long time, Wilma suddenly started to tense up. It was something that happened every hour just before all the cuckoo clocks would go off at the top of each hour. She did not have to look at the clocks to know when the top of an hour approached. Her body was so synchronized with the clocks that it knew when the clocks would go off. Every hour of Wilma’s life was separated from the other hours by a cacophony of cuckoo bells and whistles. Even in her sleep her body reacted to the hourly ritual even if just to turn over without waking.

If she could help it, Wilma never left the house for more than an hour. She would always wait until right after the cuckoo symphony and then leave. This gave her exactly one hour to shop or run errands. Invariably, she would come home within just a minute or two of the next hour’s heralding. Very rarely was she not home by the top of the hour.

Once recently, Wilma was away from home for over four hours in order to make a doctor’s appointment across town. She was a nervous wreck after taking the bus and then having to wait for over an hour for her appointment. After being told that she had a brain tumor, the rest of the outing seemed to happen in a daze. Wilma hardly remembered walking and walking, as she decided not to take the bus home. She was so confused that she felt walking might help her sort her feelings. She ended up walking for almost two hours. Eventually she ended up on a park bench crying. She cried for a long time until there were no tears left. She then just sat for a long time until suddenly her body started getting agitated.

This brought her out of it. She knew the cuckoo clocks would be going off in just a few minutes. The feeling in her body was indisputable. Jumping up from her park bench, she hailed a cab. Although she wasn’t even sure where she was, it turned out she was not far from her apartment. She was able to make it home very quickly. She raced up the stairs and unlocked her front door as quickly as she could, her hands trembling. No thoughts of tumors distracted Wilma from getting into the house in record speed, despite having to unlock three separate locks on her door.

Once inside, she slammed the door behind her and rushed into the living room. She was met only by the soft tick-tocking of the clocks. Looking at the times on all the clocks, she saw that it was two minutes past the hour. She had missed the hourly cuckooing! Wilma was suddenly gripped by an intense fear and sense of doom. She began shaking and once again crying. She knew that soon she would not be coming home also.

Wilma refused all medical treatment. She just would not leave her apartment long enough. She never missed another cuckoo symphony for the rest of her life — which lasted only 8 more weeks. It never occurred to her to destroy the clocks. Instead, she let the clocks destroy her. Only death could stop the clocks. Even for a couple hours after her death her body was still reacting to the tops of the hour.