Driving Into a Storm 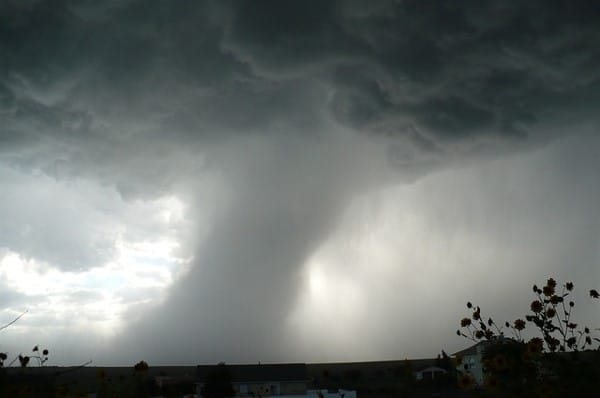 Andrew drove the Suburban down the highway in an alert state of panic. He could see the storm clouds coming. The six passengers in the vehicle were, for the most part, oblivious of the impending situation.
They were laughing and reminiscing about the night before. They had performed one of their best concerts. Everything seemed to come together and everyone seemed to be at the top of their game. There were no screw ups. The energy was the highest it had ever been on the tour.

And the crowd! The audience was at a fever pitch. They loved everything the group did. And they kept wanting more and more and more.....

In his mind, Andrew replayed the map he had studied before they left the hotel. He knew the direction the highway they were on took them in. He could also sense the direction the storm he was watching was taking and he figured there would be a direct collision. He wondered if he increased his speed significantly would they be able to outrace the storm. He also wondered if he slowed down if they would be able to avoid a direct hit. While his mind vacillated about what speed to undertake, his foot upon the gas pedal of the Suburban held steady at 70 miles per hour. Getting a speeding ticket was the least of his worries.

The laughter from the back of the vehicle seemed to intensify just as Andrew's indecision also intensified. He suddenly realized how insignificant he usually was. The band always made all the decisions. He was simply a driver and only made mundane map-oriented decisions. He was not well-paid but his bonus was being a part of a very high-energy group of creative people. He loved his job but now suddenly found that his job now required decision-making that could very well be more important than the group who previously made all of the decisions--the group who now seemed utterly oblivious of the decisions going on in Andrew's mind.

Did any of them even notice the approaching storm?

It was an older model Suburban and it had no GPS. Andrew didn't care about this at the beginning of the tour. He had always relied on his own inner GPS. But now he was wondering what some GPS voice would be saying. Would it be saying, "You are heading directly into a storm. Turn around now." He then wondered if a GPS directional voice would also be tuned into the weather. Was there some internet voice that combined the two? He thought about turning on the radio to hear a weather forecast but he decided he did not want to hear anything but the inner GPS within him. He decided to follow his gut.

As Andrew turned on the windshield wipers a female voice from the back of the vehicle suddenly proclaimed, "Hey, what the fuck is going on?"

That was the young female roadie the band picked up in the last city. Andrew said nothing.

The energy from the back of the vehicle suddenly changed. The gaiety vanished and a hollow silence ensued for a minute or two.

Randy, the bass player, suddenly spoke up, "Hey, that's a mean-looking storm. Why are we driving right into it?"

Andrew said nothing as he suddenly felt fear emanating from the back of the Suburban. His foot depressed on the gas pedal a little further, sending the speedometer above 80 miles per hour.

And that is when he saw it. Off to the left of the highway just a little bit, Andrew saw a funnel cloud come down out of the dark overhead clouds.

Andrew was not the only one who saw it. Travis, the drummer, yelled out, "What the fuck is that!? Is that a freaking tornado?!"

Andrew could almost feel the entire group behind him lean towards the left side of the vehicle to look out the windows. The energy from the back of the vehicle drastically intensified but as it did, Andrew's energy seemed to stabilize. His foot depressed the gas pedal even further and suddenly they were traveling over the wet asphalt highway at over 90 miles per hour.

"Dude!" yelled Randy the bass player. "Shouldn't we be turning around? We're headed right into that!"

"Hey, asshole! I've got graduation in two weeks. What the hell are you doing?" yelled the female groupie.

"Andrew, what are you doing?" asked Killer, the lead singer of the band.

Andrew responded to none of the inquiries shouted from the back of the vehicle. He was totally focused on his race with nature. As he saw the funnel cloud fall to earth he stepped on the accelerator even more, pushing the vehicle over a hundred miles an hour. Luckily, there seemed to be no other traffic on the road all of a sudden.

As Andrew drove the group from city to city, while they performed he stood in the back of the audience wondering what it was like to be up there on the stage putting out all that energy. He was no musician but he always somehow understood energy.

Now, the strongest energy he felt was the energy of the approaching storm and that funnel cloud which seemed to be headed straight for them. While the group behind him accelerated their comments towards him, he fully blocked out everything they were saying. Suddenly, there were only two things that existed and they were him and that funnel cloud.

The rain was now coming down so hard that the windshield wipers could barely keep up. Andrew's knuckles turned white as he gripped the steering wheel harder. To his amazement, he now had no fear whatsoever. He was now following some undefined inner directive. He was now driving faster than he ever had--and over wet, slick road--but he suddenly felt utterly assured of his inner guidance.

A huge wave of panic flooded up from the rear of the vehicle. Band members and groupie were now yelling but Andrew did not hear any of it. His total focus was on his driving and on the funnel cloud headed towards them.

There was a brief moment when Andrew realized that he was on the verge of outrunning the storm. His inner GPS was somehow doing the math and Andrew began realizing that they were going to beat it. He kept focusing on his driving and did not let up on the speed. He reached a point where he realized that they were either going to make it out of the storm or wreck from the incredible speed over the wet roads. This is when he put the storm completely out of his mind and focused exclusively on the road.

An eerie silence fell over Andrew as he was now unable to hear anything coming from the back of the vehicle. In fact, he could not hear anything at all. All he saw was the road before him. It was like he was on stage and saw nothing but the crowd below.

Eventually, his hearing came back to him. The first thing he heard was, "Hey dude, you can slow down now." It was coming from the back of the Suburban but Andrew had no idea who it was coming from.
Andrew suddenly realized that it was no longer raining. The road was dry. Taking a deep breath, he took his foot off the accelerator and the vehicle quickly began slowing down. It was almost like he blacked out for a moment. It was like he suddenly drove into a new reality. Looking in the rear-view mirror, he realized that he had outrun the storm. They were safe.

In the next town Andrew told the band that he would drive them to their next gig but after that he was quitting. They pleaded with him not to but his mind was made up. After leaving the band he stopped at a jewelry store then headed for the airport. On the flight home on the airliner high above all the storm clouds he went over all the ways he would propose to his girlfriend.