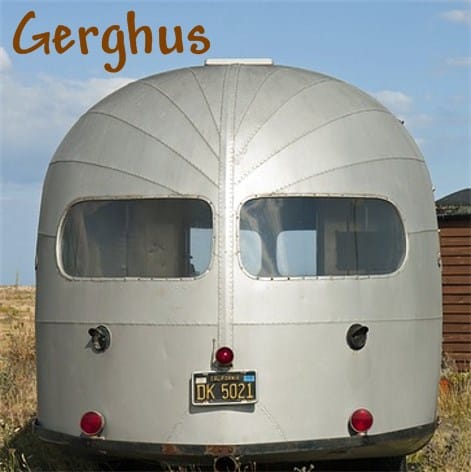 In a remote desert canyon, Gerghus lived in a small Airstream trailer that was parked on a bluff overlooking a sparsely traveled two-lane desert highway. The trailer was strategically placed so that it was not noticed by those driving the highway, yet Gerghus could watch the traffic from his trailer window.

He had been living there for over two years, but could not identify why he was drawn to the spot. It was surely one of the loneliest places imaginable. There were no other people living anywhere nearby. The conditions were stark to say the least. The summer heat was searing and it only rained a few times each year. Vegetation was sparse, but tarantulas and rattlesnakes and scorpions were plentiful. Gerghus had to drive his pickup truck sixty miles to the nearest town for supplies and water.

Gerghus spent his days watching traffic. On slow days no more than ten cars would drive by all day long. On busy days there were no more than fifty. What was very rare was for two cars to be coming from opposite directions at the same time. It was so rare, in fact, that Gerghus had yet to see it happen. From his vantage point, he could see about five miles of highway in either direction, and never had he seen more than one vehicle at a time. Even if he was not watching the highway, he could hear approaching vehicles and he would always stop whatever he was doing and go watch the vehicle drive by.

He only drove for supplies once a month, so only part of one day each month was the highway not watched by Gerghus. Even at night, he awoke to every headlight. There was a window by his bed that looked out over the highway, and Gerghus had only to sit up in bed to watch the rare car pass at night. In the evenings, Gerghus had a place he hiked up to where he could watch the sunset while still keeping an eye on traffic. And there was a place under a large rock overhang where Gerghus could get out of the afternoon sun yet keep the thin black ribbon of asphalt within the scope of his vision.

In the years preceding Gerghus's move to this remote location his life had been unraveling. He seemed to go from one disaster to another. It seemed like he was a different person. Nothing in his life mattered anymore, nor did any of his friends and family, who now seemed like strangers. It was in an effort to put all that behind him that Gerghus sold most of his possessions and loaded the rest into his trailer. He had no idea where he was going. Traveling for just a few months, he came upon this remote place and was overcome by an inexplicable urge to stay there. Over two years later, he still had not figured out what he was doing there.

One evening, while watching the beautiful desert sunset from the favorite spot he hiked to, Gerghus remembered everything and everyone he had left behind. His wife, of course, had left him, claiming irreconcilable differences; the differences all being within Gerghus. He had to finally agree with her when she had said, "I never know which Gerghus you are today." One of his friends actually had the nerve to suggest that Gerghus had a split personality and was in need of therapy. Well, sitting there on his cliff looking out over miles of uninhabited land, Gerghus was giving himself therapy.

He thought about his job, which he did not miss at all. His job also left him. Just a few years before, Gerghus had been honored for his job performance at a special reception. In the space of about six months, though, he lost all his motivation. It became hard to even go to work, and when he got there he languished in his own self-pity. All his co-workers began avoiding him and rumors spread. His ennui became so intense that he just could no longer do his work. Just a few days before he was fired, a co-worker had said to him, "We sure miss the old Gerghus."

That was when Gerghus realized that he missed the old Gerghus, too. And who was this new person inside his body? Whoever he was, he was very mixed up. He had no love for himself or others. He saw the dark side of everything. He was always sad and morose. He had no feelings for others other than contempt. There was a big hurt being experienced by this new person, but Gerghus could not figure out where it came from.

It was this new person that drove Gerghus to this remote location to be all alone. Apparently, this new person had to fully experience this pain before he could move on. Day after day after day of sitting in contemplation left Gerghus calmer but no closer to completion of the new person's pain. Gerghus had given up, handing things over to this new person. He was just waiting. But for what?

Gerghus could pack, hitch up the trailer to his truck, and move on within an hour, but a mysterious inertia kept him from ever doing so. Living very simply on this beautiful but harsh land, he came to know the subtle energies and beauties of the land. Although he never walked far enough away from the highway to miss any traffic, his daily morning and evening walks covered a lot of ground and seemed to calm him. He developed a familiarity with the land, but not a love. Though it soothed him, the land itself was not what was keeping Gerghus there.

Looking to his left, Gerghus scanned the highway as far as he could see. There was no traffic. Then he looked at the setting sun on the other side of the highway for a while. Gerghus had watched every sunset here for over two years, and today's was one of the most spectacular. Gerghus then looked to his right to check for traffic coming from that direction, and sure enough, there was a very faint pair of headlights on the horizon. Something was coming! He had not seen a vehicle since around noon.
Gerghus turned his attention back to the sunset, knowing it would still be a few minutes before the vehicle would reach the point of the highway just below the cliff upon which he sat. Though he was miserable and unhappy, Gerghus was unable to deny the beauty that touched him at that time of day. Today, the beauty seemed to reach new levels within him. A bubble of joy was growing within him that was nearing the point of popping.

Then Gerghus looked to the right again. The headlights were brighter. They were undiminished by the long shadows falling across the road. He figured it was now less than a mile away.

Gerghus then made a quick perfunctory glance to his left. There were no headlights. It was as he was turning his attention back to the right when he spotted some movement and turned his attention back to the left. Upon closer inspection, Gerghus realized that there was a vehicle coming from the left, too! It did not have its headlights on, though, which was not very smart at this time of day, he thought. Then, Gerghus realized that the vehicle coming from the left was less than a mile from the point just below his cliff.

He quickly looked to his right again, then his left. To his amazement, he realized that both vehicles were about the same distance away and they would surely pass each other just below him. That was something he had never seen before! An excitement arose within him. He looked at the sunset again briefly, then back at each vehicle, and then he quickly stood up. This was a momentous event, and it was happening quickly.

Gerghus let go of his attention to the sunset. That was something that happened every day. He found himself looking back and forth at the two approaching vehicles. And soon he realized that the vehicle approaching from the left without its lights on was driving erratically all over the road. A sudden feeling of dread enveloped him. Despite the lingering heat, a chill coursed through Gerghus's body. He got the impression that the driver of the vehicle on the left was perhaps falling asleep or having some problem. Looking back to the right, the vehicle with its lights on was driving smoothly. He could now see that both vehicles were automobiles. Looking back and forth he figured they would surely pass each other just below him.

The car on the left was now driving straight and a very brief moment of relief was felt as Gerghus clutched his hands together in anticipation of the passing of the cars. He kept turning his head back and forth until the passing was imminent and then he just looked straight down at the road where they would pass. As the two cars came into his peripheral vision, a feeling of horror erupted within Gerghus.
It happened so quickly. Gerghus watched the car without the lights swerve at the last second right into the path of the car with lights. Gerghus watched the two cars crash head-on into each other. He began trembling and crying. He put his hands over his opened mouth. An energy from deep within him seemed to explode, rattling every fiber of his being. His trembling increased and he knelt down onto the ground as he seemed to be losing control of his body. Then he fell down on the ground and trembled uncontrollably for several minutes as he felt the energy that exploded from deep within him expand out through his body and then leave his body. The trembling slowly stopped, but Gerghus continued to lie on the ground sobbing for several minutes.

Slowly, an intense calm enveloped Gerghus. He stood up, and, although he was cold, he felt oddly invigorated; at least certainly different. Looking down at the wreckage of the two cars, one of which was on fire, he realized that no one could have survived that accident. And then he got the strange impression that part of his self also died in that accident. Was it that new part of his self that had brought him here to this certain stretch of highway? Could that new part of himself have been connected somehow to one of the two drivers? That did not make any sense to Gerghus. None of it made sense. What was more important to him was the feeling he had of himself. He felt like a whole new person. And he no longer had any desire to stay there.

But he stayed and watched the remaining sunset as though he had never seen a sunset before. Tears of joy rolled down his cheek. As the last of the colors began fading and the first stars began twinkling, Gerghus left his lookout point and went to his trailer. Without ever looking at the highway, he packed his things, hooked up the trailer to his truck, and within an hour he was gone.