I Am the Son of a War Refugee 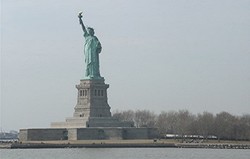 Whenever I tell people that, “I snuck into America hiding inside my mother’s belly,” they look at me like I’m some kind of weirdo terrorist. So maybe I should explain…..

My mother is of German descent but she was born and raised in what was then the Sudetenland of Czechoslovakia. The Sudetenland was filled with many ethnic Germans. Most of them, including my mother’s parents, celebrated when Adolf Hitler invaded and took over Czechoslovakia. He promised to “save” the Germans from the Czech majority.

Near the end of the great war the Russians overtook Czechoslovakia and they decided to ethnically cleanse Czechoslovakia of all Germans. One day Russian soldiers appeared at my mother’s family home and, at gunpoint, they ordered them out of their home. They lost their home and all of their possessions except for the clothes on their backs and were put on cattle cars with other Germans and were shipped to Germany where they spent the next few years in a refugee detention camp.

The war finally ended but life was beyond bleak for my mother’s family living in a detention camp for refugees. I’m not sure there are any American teenagers today who can even imagine spending their teenage years like this.

My mother told us plenty of stories of how horrendous it was to live in post-war Germany. The country was utterly decimated. My mother’s family was able to finally find employment and eventually worked their way out of the refugee camp into meager housing. My mother proceeded to feverishly learn English.

To so many young eligible young German women at that awful time their ticket out of that hell hole was to find and marry an American G. I.

After the honeymoon the new little family moved to Ulm, West Germany (it was West Germany now instead of just Germany). It was there after their honeymoon that my parents conceived me. I was conceived in the town where Albert Einstein was born which has nothing to do with anything except for the fact that I always remember it that way.

It was halfway through my (my mother’s pregnancy) that my father was shipped states-side (army lingo for being reassigned to America). He went to Kentucky to sign in and find housing for his new “foreign” family. Once everything was in order he sent for his new little family.

My mother, who was 7 months pregnant with me and my older brother who was not quite 2 years old traveled to Hamburg where they boarded an ocean liner, bidding farewell to their native Germany. They traveled on a big boat across the Atlantic Ocean towards Ellis Island.

According to my mother, she was seasick for the entire boat ride across the Atlantic. She told me that she spent the entire voyage vomiting. I happen to be rather adverse to boats and ocean voyages and I’m not sure if this has anything to do with it.

I ended up being born in Kentucky a full-blooded American citizen born on American soil, the son of a war refugee. When I was growing up I used to kid my older brother about the fact that I could technically and legally run for President of the United States while he could not since when he was born before our mother was not yet technically a citizen of America.

When I hear all the birther stuff about Ted Cruz I just have to laugh.

So what does my story have to do with anything?

I am an American. I was born on American soil. And I am the son of a war refugee. (Just like Steve Jobs.)

The young whippersnappers in their twenties and thirties today have no earthly idea what people went through because of World War II. They may have a grandparent or great-grandparent who told some stories but those stories are easily lost in today’s world of video games and mainstream internet. The atrocities of Word War are inconceivable to the young people of today.

When Germany was in shambles after World War I along came a politician who rose to power on the slogan, “I’m going to make Germany great again.”

Today in America there is a politician using Adolf Hitler’s playbook. His name is Donald Trump. Like Hitler, he is promising to make America great again. And, like Hitler, he is using foreigners, refugees, and all non-whites as the scapegoats for why America is losing.

When Trump continuously equates all refugees as terrorists I want to puke. I am the son of a refugee of war! When Trump says that we should put the Mexicans in cattle cars and ship them south of the border I cringe because of the stories I heard of what happened to my own mother in Czechoslovakia. When I hear the vile white supremacy coming out of Donald Trump’s mouth I want to puke knowing that so many of dear friends are not white. When I hear the pure unadulterated hate coming out of Donald Trump’s mouth I am reminded of Adolf Hitler.

For them, the hate-filled diatribes of Donald Trump are something that gets them excited. They don’t know why but their emotions are stoked. Their hate is assuaged. Their frustrations have found an outlet.

The exact same thing happened in Germany in the 1930s.

It is my opinion that Donald Trump is the ideological reincarnation of Adolf Hitler. He is precisely following Adolf Hitler’s rise to power. And so much of America is utterly blind to this. Given my personal history I cannot help but see it. I am the son of a war refugee. I can see when history is repeating itself.
What will it take for younger generations to see this?

What will it take to keep World War III from happening?

I implore all Americans, no matter who your parents were, to take a good, long look at what is happening and to take action to see that it doesn’t happen again. A vote for Donald Trump is a vote for World War III. Please don’t let history repeat itself. Let us instead move forward into a world of peace and love. We are all refugees from a heinous history. Please let us acknowledge that, evolve, and move beyond that. Don’t let Donald Trump lead us back into a repetition of the past.