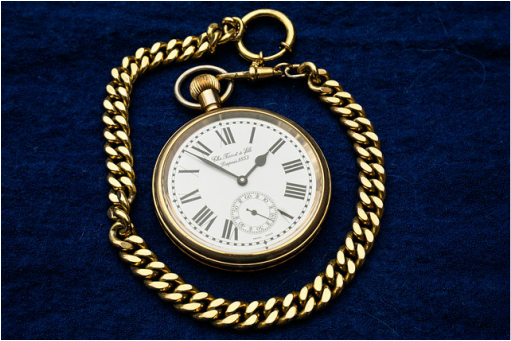 As a young kid I was very enamored of my maternal grandpa. We spoke different languages but he always had my attention. When ever he went out he always wore a suit with a vest and in that vest was a pocket watch. I thought that was so freaking cool!

I proclaimed to anyone who would listen that I wanted a vest and a pocket watch for Christmas. Well, Santa made my wish come true. Always one to save a penny, my mother made the vest for me. She made a lot of the clothes we children wore and that was a serious point of contention between my mother and me. I will have to talk about that some day.

Naturally, I outgrew the vest rather quickly but I never outgrew that pocket watch, although I do not know what ever happened to it. I am beginning to think that it may have been an imaginary watch.......

It was many years later that, as an adult, I had my little watch ceremony. It was on my twenty-third birthday and I was living in West Texas at the time. Ronald Reagan was president but I paid little attention to that. I had gone for a long walk out into the brushy desert. When I was far enough away from civilization I stopped under the shade of a short mesquite tree. (One must always be very gentle when hugging mesquite trees because they have thorns.)

I knelt down on the ground by a fairly large rock. I then took my Bulova wristwatch off of my wrist. It had been a gift some years before but what I was about to do had nothing to do with the person who gave me the watch. No, this was all about time and changing my perspective and habituation in regards to time. I was not killing time as much as I was killing (at least partially) my bondage to it.

I set the watch down on the rock on the ground. I then looked around for another rock. Finding one, I bounced it in my hands. It had the size and shape of a ripe cantaloupe but, of course, weighed much more. I took three deep breaths and then slammed the rock in my hands down onto the wrist watch, smashing it to smithereens.

I have not worn a watch since then. My wrists have been free of any and all gadgetry for over thirty years. And I have no pocket watch, either. I carry no time pieces anywhere on my person. That has been my rule ever since that warm spring day in the forlorn oil-pump-jack-littered West Texas landscape.

I never carry time with me. Independent of time, memories are not so easily shattered.