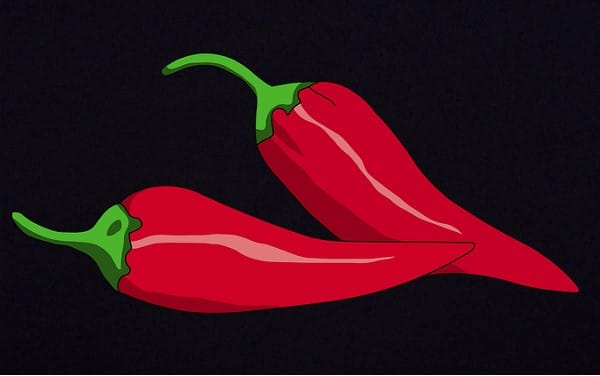 The neural synapses in our noggins that register sexual pleasure also register pain. There is no difference in the initial registration. It’s the same thing. Subsequent noggin activity then measures the impulses and gauges them as to how they fit into the spectrum, or octaves, of vibrations. The noggin then goes through its files to see what matches up with the particular vibration and then responds accordingly. The files we have for any level of vibration generally are a history, or conditioning, of how we have reacted to that particular vibration in the past. That conditioning is very much tied into our belief system. We can say that beliefs are thoughts that have been repeated so many times that they become automatic responses. They are like a file that immediately pops up in reaction to certain vibratory impulses registered by the noggin.

Well! You can just call me a masochist then because I love hot chile peppers. But the way I see it, when we eat food that food has vibrations that run the full length of food vibrations. Sweet foods vibrate at a certain level, salty food vibrates at a certain level, and so forth. Likewise, spicy hot food also vibrates at a certain level. The sensors on our tongue are equipped to register the full spectrum of vibrations. The sensors sense but it is the noggin and its conditioning that classifies and responds to the vibrations being sensed. Most people are conditioned to partake of only a narrow part of the overall spectrum of food vibrations. Hot chile peppers vibrate at the far end of the spectrum while most people are conditioned to stay within a narrow band in the middle of the entire spectrum. So anything outside of their conditioned comfort zone of vibrations is seen as “bad” or as a threat or as pain, which is seen as “bad.” So what this article writer was classifying as pain was something that was simply outside his conditioned comfort zone of vibrations. What to him was pain, to me is an orgasmic culinary experience.

It all depends on how one looks at things and that is usually determined by how one is conditioned to look at things.

While we are on the subject of noggins I want to relate something I learned recently. There has been a lot of scientific breakthroughs in recent years concerning noggin science. One particular research study was attempting to figure how long it took for a nerve impulse to travel from a finger that had been pricked to the noggin and then how long the noggin took to assimilate the impulse and react. It was believed that as soon as a finger was pricked a nerve impulse immediately traveled from the finger to the brain where it was registered and then another nerve impulse would shoot back down to the finger where it registered as pain. This happens so quickly that it seems instantaneous.

Well, the researchers wanted to find out exactly how quickly this happens. To their surprise they learned that the sequence of events is not what we thought. They discovered that the noggin actually registered the finger prick BEFORE it happened and it sent the nerve impulse down to the finger just in time to meet the actual pricking.

Isn’t that interesting? Does it mean that we are all psychic? Is it indicative of the possibility that we all create our realities? By the way, the test subjects were blindfolded and had no way of knowing when the prick was coming. Could this be an important discovery with mind-blowing consequences?

I guess it all depends on how you look at it.

P. S. By the way, chile (with an e at the end) refers to a vegetable known as a chile pepper. Chili (with an i at the end) refers to a tomato-based meat stew (such as that found on a chili dog). This has been the proper usage of the two words for many, many years but chili (with an i at the end) has been incorrectly used so much in recent years that the newest dictionaries have started to accept it as a spelling attached to the chile pepper vegetable in addition to the meat stew. I may be silly but I am a hot chile pepper aficionado and I cling tenaciously to the older correct spelling usages.
* * * * *
Copyright by White Feather. All Rights Reserved. Thanks for reading.