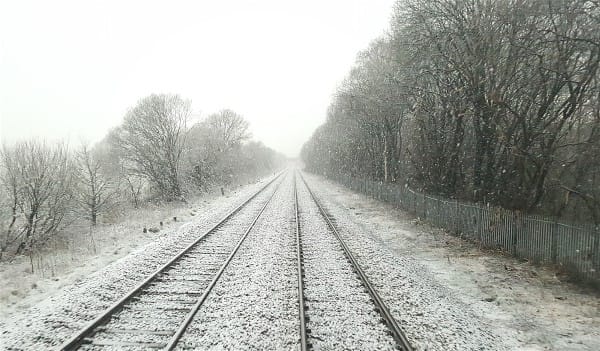 Not many people know this but trains are louder in winter than they are in summer. It’s a scientific fact — at least someone told me it is. I’m not sure. It makes sense to me, though. In summer all the trees near the railroad tracks are leafed out and all those leaves absorb a lot of sound. Then there is the air itself; thin in winter and thicker and more sound absorbent in summer. I’m not sure what the reasoning is — and don’t care — but this is something I’ve noticed in the almost five years that I’ve been living just four blocks from the railroad tracks. I’ve also noticed that the trains are a lot louder when I open the windows.

It has been pointed out to me that if trains are indeed louder when the windows are open then they should technically be louder in the summer instead of the winter because it is in summer when the windows are open the most. While that iron-clad logic is difficult to refute, my empirical observations have clearly shown me that trains are actually louder in winter. It would be easy for a battle to ensue between my auditory faculties and the left-half of my noggin but no one cares to buy a ticket for a seat to that show so such unnecessary warfare will be averted.

Back when I lived in Colorado my wolf-dog would take me for long walks along the old abandoned railroad tracks. We would walk for hours listening to the sound of trains. Of course, since there were no trains what we were actually listening to was silence, one of the most pleasant and powerful and invigorating sounds known to human ears. At least that is what I was hearing. I can’t speak for the dog.

Here in the little backwater town in which I live, however, the trains are very loud. And if you are foolish enough to try to take a walk along the railroad tracks it will only be a matter of minutes before a SWAT team encircles you and orders you off the tracks — or so I’m told.

The other day I had my windows open and there was a train going through town but I could not hear it. I could actually see it from my window through a small break in the urban forest canopy — a hole that will disappear come spring when the trees leaf out again. Then I will no longer be able to see any trains. I will only be able to hear them (and feel them as the building shakes). But that day I could see the train but not hear it and the reason is because just outside my opened window were approximately 250 to 350 birds, each and every one of which was chirping as loudly as it could. Imagine that; I could not hear the train because the birdsong was so loud! How fantastic is that?

And where is the logic in that? How on earth can four Burlington, Northern, and Santa Fe engines pulling eighty cars be quieter than a couple hundred tiny little itty bitty birdies? It is a conundrum that any left hemisphere of a human brain would find delicious and exciting. Of course, that could be a distraction from the joy of simply experiencing the mystery.

And, of course, that mental distraction would only lead to further mental distractions…. such as pondering if perhaps the trains are actually the quietest in springtime.
As that train disappeared to the west and the building stopped shaking I released all thoughts of trains from my noggin. With an empty mind I allowed the birdsong to wash over me and transport me to paradise.