Running Away From Battle 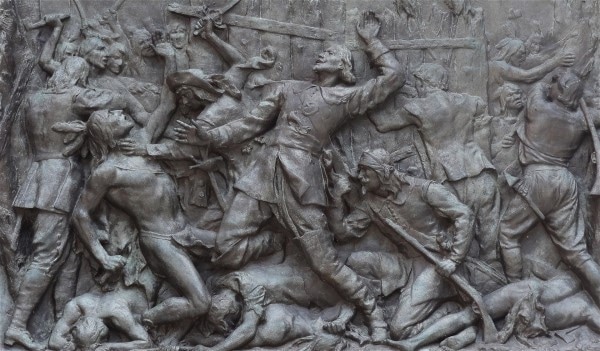 Normally, the warrior saw this as a challenge. He preferred to be outnumbered because that magnified his victories. He had led his men into battle many times and had always won every battle, even if there were heavy losses. The leader, however, was never struck by a bullet or stabbed by a bayonet. He was considered invincible. It was said he possessed mojo. His men always followed his charge into battle without question.

Suddenly, he heard the trumpet blaring atop the hill on the other side of the valley. He then watched the opposing army descend the hill towards the warrior’s men. They were led by the opposing general on his shiny black horse.

But the warrior did not yell out the cry for his men to charge against the oncoming army. He knew that it was better to wait until the opposing army had reached the bottom of the valley and were headed up the hill where his men awaited. Then he would give the cry for his men to charge and the opposing army would then be fighting his men going uphill. His men would have the advantage because the opposing army and its horses would already be somewhat spent as it came up the hill and they would be fighting the warrior’s men with the sun at their back. They would be blinded going uphill into the fresh waiting arms of the warrior’s men. So he waited….

But to his utter dismay, the warrior’s men did not wait for him to give the command to charge. Upon seeing the opposing army come down the opposite hill they immediately began charging down the hill to meet them in the valley below.

The warrior suddenly knew that this was the end. He could feel his people’s horrific defeat about to take place. He quickly pulled his pony to the right and began riding off away from the battle. He kicked his pony into a fast gallop and raced away from the scene as fast as he could. He descended down the next valley over and up the next hill. He raced down several valleys and up several hills until he was far from the battlefield.

At the very edge of the water, the warrior dropped to his knees and repeatedly splashed water on his face. He wept tears that immediately dissolved into that water. The horror of defeat rippled throughout his body. He finally stopped splashing water on his face and covered his face with his hands as a tremendous sorrow enveloped his being.

Eventually, he removed his hands from his face and looked down at the water of the pond. It was much stiller now and he could see a faint reflection of himself in the water.

And that is when he realized that every battle he ever entered into was a reflection of the battles he waged within himself. He looked up into the sky and let out a spine-tingling scream.

He now realized that the war would continue for generations.