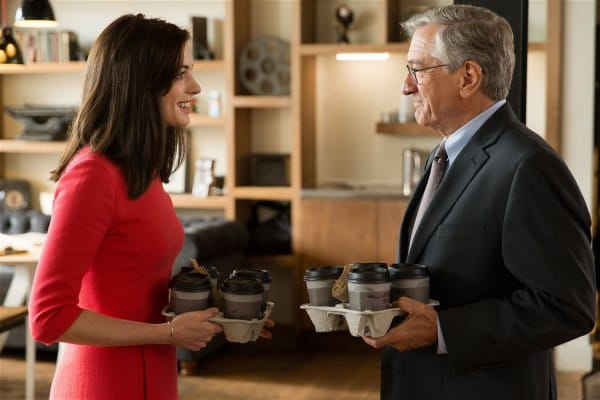 His role in the movie, “Intern,” is a profound message for humankind.

I have always been a Robert De Niro fan. I have not been much of a fan of so many of the movies he was in earlier in his long, distinguished career, though. Those movies were just way too macho for my taste. But a few of the roles he has taken on in the last few years have really turned me on.

Most male Robert De Niro fans would emphatically disagree with me. I have read several articles online recently by male film critics and male film critic wannabes, all of whom have complained how De Niro has abandoned his macho image to play serious, cerebral roles as well as comedic roles. How dare he?! They all lament the ending of De Niro’s career because of his choice of non-macho roles. One of them had the audacity to say that he has ruined his career by appearing in “chick-flicks.”

I missed the movie, “Intern,” during its one-week showing at our local movie theater. Actually, I almost never go to the movie theater anymore. I would rather watch movies in the comfort of my Lazy-Boy in my own home. Not only is it way cheaper but it is more intimate. And I do not have to miss anything if I have to pee.

So I got really excited when “Intern” came out on DVD and Blu-ray in January (it was supposed to come out in December but was delayed). But I have been really busy and have not gotten around to it.
In the ensuing weeks since its release I have talked to several people who have seen it. I asked all of them for their take on the movie. These people (friends, associates and strangers) were roughly 50% male and 50% female.

100% of the males I spoke with were disappointed in the movie. I heard comments like, “It was so slow and dull and boring,” and, “I saw the movie because Robert De Niro was in it but there were no guns, no gun fights, no violence, no explosions, no car chases, no fight scenes…..Jesus, it was so boring!” and, “I saw the movie with my wife and she was crying and I was ready to shoot myself. It was a movie about feelings. It was a freaking chick-flick for crying out loud!”

After hearing these very diametrically opposed responses to the movie I just knew that I would love it. (I should point out that I am male but I am also an extreme feminist.)

So today after work I rented, “Intern,” and came home. For dinner I prepared my secret recipe Grey Poupon-smothered baked chicken thighs with wild rice and broccoli. Dinner and a movie. It doesn’t get much better for an old single guy such as myself.

It turned out that I liked the movie WAY more than I thought I would. Not only was Robert De Niro’s performance utterly stellar (as was Anne Hathaway’s) but the movie turned out to have a profound message that is critically important in today’s world.

Well, this movie took everything mentioned in the many articles here and put them in a story that presented a ‘what if’ scenario. What if women really did take over leadership roles and helped shape both commerce and society? And what if men, instead of becoming defensive and combative about it, played a supportive and nurturing and mentoring role to these new changes?

Instead of the macho dude, Robert De Niro played the role of an experienced businessman who became the supporting and nurturing intern/employee/mentor to a woman newly coming into what has always been a traditionally male role. It was more than just a role reversal. It was about finding a balance of energies within each role. Both players in the drama were transformed through finding balance both between themselves and within themselves.

It was not just about what women face in taking on new leadership roles but it was just as importantly about how men can help facilitate a transitioning towards this social balancing. It showed us new roles each of us can step into. The movie was not one-sided at all. It was very balanced in presenting both sides of a very important and very real societal evolution currently taking place. And that is why it utterly filled me with joy.

And that is why I hope others will watch this movie with an open mind and an open heart.