Teenage Girl in the Forest 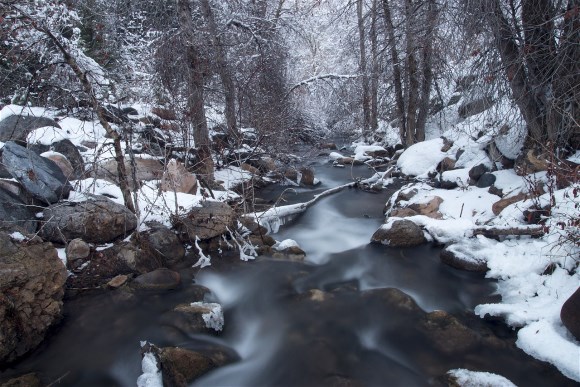 Lonnie was walking home from school. It was January and she had not walked home since the first day of school back in August. After that first day (when she missed the bus) she had caught the bus every day for over a month. Since then she caught a ride home with her new boyfriend. He was a senior and had his own car. Lonnie was still three months away from getting her driver’s license and she had no idea how long it would be before she had her own car.

But today she had broken up with her boyfriend. She caught him kissing Mandy, her nemesis since sixth grade. She was so upset that she missed the bus and ended up walking home over icy and snowy streets. It was bitterly cold but her angry thoughts seemed to somehow warm her as she walked. She replayed the sight of him kissing Mandy over and over in her mind. Her heart was racing and she was mad as hell and therefore she was almost oblivious to the cold.

With her gloved hands she tried to wipe the tears off her face but they seemed to freeze before she could wipe them off. Having experienced such a horrible day, she just wanted to get home and lock herself in her room.

Oblivious to everything but her own footsteps she walked and walked. But then suddenly she heard a loud bird. She was pulled out of her thinking. And then she stopped in her tracks. Looking to the side of the road she noticed a path that led down to a creek.

She remembered that path because on that walk home way back on the first day of school she had stopped and walked down that path. She had walked into the forest and found a place where there was a fallen log next to the creek. It was still summer then and she had sat on that log for a long time watching the water flow down the creek. She had listened to the birds and luxuriated in the shafts of sunlight streaming down through the trees. She remembered having spotted a frog sitting alongside the creek. She watched that frog for a long time and that time in the forest was magical to her. It was so relaxing and inspiring and uplifting.

But it was winter now and there surely were no frogs and it was cloudy with no sunshine. And it was cold! But she felt compelled to take that path down into the forest. She looked around for a moment then proceeded down the snowy path.

When she got to the fallen log she brushed the snow off of it and sat down. Hugging herself for warmth, she looked around at the creek and forest. It was so different than when she saw it back in August yet it was also the very same place.

The sound of the water trickling in the creek calmed her. Aside from the trickling water it was eerily quiet and there was no movement. The serenity seemed to erase all the endless thoughts racing through her mind. She forgot about her boyfriend and school and her friends and her parents and even herself. Her mind seemed to completely empty She became merely an observer. And suddenly she was overcome by the beauty of it all.

She realized that the spot in the forest was the same as before. It was just the conditions that were different. The seasons came and went and underneath the obvious differences there was something that remained the same and endured the different conditions. She could suddenly feel that which did not change. She felt it back in August and she felt it now in completely different circumstances.

A realization suddenly came over her that she was like that spot in the forest. While outward appearances seemed radically different there was something beneath the scene that remained the same. The beauty was still there. The feeling was still there. With a quiet mind she could go beneath the surface of things. She could connect with the essence, the life, of the place.

It seemed that her life had changed from summer to winter. It had turned cold and barren and lifeless. But she suddenly realized that there was something beneath that which had not changed. She suddenly felt the life beneath her situation. She touched the beauty that was there. Her thoughts were like the snow and ice and cold. Beneath those thoughts was something that endured the seasons. Beneath that was the joy of life that was hidden by all her thoughts.

After half an hour of sitting on that log she began shivering. Smiling, she got up and returned to the road and finished her walk home. Once inside her mother looked at her and said, “What’s with you? You look so happy. You must have had a great day.”

Without saying anything Lonnie kissed her mother then went to her room.