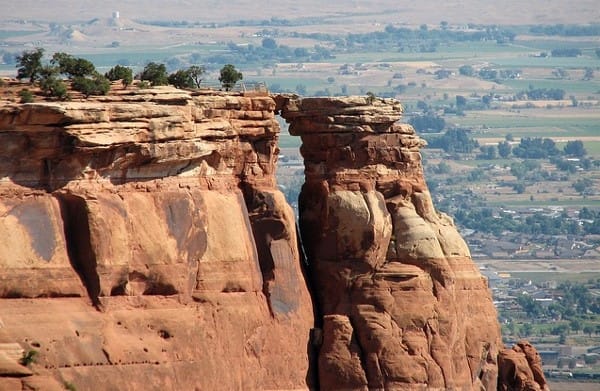 Gregory lived in a medium-sized city that had mountainous cliffs encircling the city to the north. He had a great job making a modest living and he had a wife and two young children. He was a member of several groups and a church and he and his wife had several good friends that they partied with on occasion. His life was good, or so he thought, but occasionally he felt overwhelmed and in need of getting away from it all.

One day he told his wife that he needed to get away and that he was going for a hike. She needed a break, too, so she encouraged him to go.

He drove out to a point north of the city where a walking trail led up to the cliffs overlooking the city. He was wearing all the appropriate clothing for an extended hike and carried with him a bottle of water. He left his car behind and began walking the trail.

It took him about forty-five minutes to reach the top of the cliffs. He had been up there a few times over the years. The first time he went up there was when he was in high school. His friends were having a party up there and he did not remember much of that evening. He had been up there twice with women he was trying to "date." He had gone up there a few times with his male friends on a weekend where all the men were trying to get away from everything. He had gone up there once alone when he was trying to get over a woman dumping him.

This time, he just wanted to get some exercise and get away from all the pressures that were weighing him down. The hike up the cliff-side was invigorating and he built up a good sweat. He was already feeling better once he got to the top.

From his past experiences up on the cliff he remembered that there was a certain spot that had the best view of the town and valley below. But when he reached that spot he noticed that there was an old man sitting in that spot in what Greg considered to be a meditative yoga lotus position. Greg just wanted to sit in that spot and just think about life. But how could he do that with that strange man sitting there?

Gregory let out a sigh and looked around to see if there was another spot that had the same views. He realized that the spot where the strange man was sitting was the very best spot on the entire cliff. He was suddenly agitated.

And then the strange man suddenly turned around and looked directly at Greg.....and smiled. He held out his arm and waved Greg over to where he was sitting.

Gregory was frozen and could not move. He came up to the cliff to be alone, not to sit with some weirdo.
The strange man waved him toward him while speaking up, "I've got a secret to tell you. Come sit."

Gregory could feel his body become defensive. He momentarily thought about heading back down the trail to his car.

The strange man unfolded his legs out of his lotus position and reached down to a bag by his side. He pulled out a cigarette and a lighter. After lighting the cigarette he once again waved for Greg to come over and sit next to him.

Tired from his hike up the cliff, Greg dispensed with his trepadations and walked over to the strange man, sitting down on a rock a few feet away from the man. He said nothing.

The strange man took some deep drags of his cigarette then turned to Greg, "You know, you came up here to get away from that city down below and to get new perspectives on things. I come here from the mountains back there," he pointed at the hills behind the cliff, "for the same reason."

Greg had no idea what to say.

The strange man took a final drag on his cigarette, putting it out and putting the butt into a pouch by his side. "Up there," he pointed again at the hills behind him, "we're not allowed to smoke. I come here to have my once-a-week smoke. Why do you come here?"

Greg wanted to ask the strange man what the reason he came here was but he could not bring himself to say anything.

The strange man picked up his bag and stood up. Reaching into the bag, he pulled out a cigarette and handed it to Greg.

After an hour of sitting on the cliff looking down on the world in which he lived he hiked back down to his car. He threw the cigarette, now wet from holding it for so long, into the trash can near his car. When he got home his wife looked at him strangely, asking, "Are you okay?"

Gregory sat down on the couch and patted the spot next to him, "Come sit. I want to sit next to you."

"Is there some secret you want to tell me?" she asked.