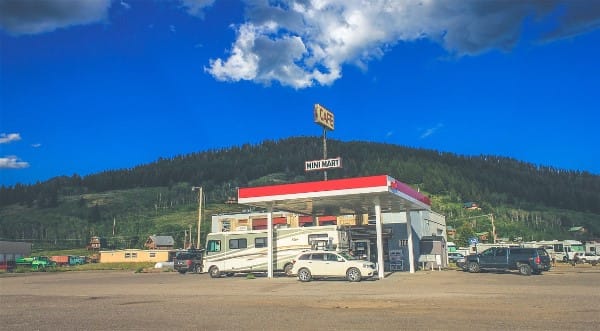 The 1957 Chevy pulled off the mountain highway into a gas station. The family inside had been traveling across the country; the two parents in the front and the four children in the back. The second oldest child — a boy named Scott — was born the same year as the car, and was now eleven years old. As the four kids scrambled out of the car one of Scott’s younger sisters asked, “Where are we?”

“Colorado,” said Scott as he raced ahead of his siblings and made it to the restrooms first. But Scott could think of nothing else until he had relieved himself. He had not peed since New Mexico. Closing his eyes, he completely emptied his mind.

Coming out of the dark restroom, Scott’s eyes were greeted by a very bright sky. He shielded his eyes with his hand and looked around. There was a man in a uniform putting gas into the car. Scott’s mother was getting something out of the trunk. The rest of the family was in the restrooms or waiting to get in one. Scott then looked around at the mountains surrounding the gas station. Though it was summer, they were covered with snow, and they were incredibly tall.

Suddenly, Scott got the urge to walk around to the side of the gas station. At the edge of the gas station property, Scott could now see a green meadow with a small stream running through the middle of it. It was incredibly beautiful, but there was something else about it that Scott did not understand. The little meadow had a very strong pull on Scott and it seemed so very familiar, but he had never been there before. Following this feeling, Scott walked out into the meadow, and as he did so, he saw the mountains rising behind the gas station.

After getting out into the middle of the pasture, Scott stopped in his tracks and stared up at the mountains. That same feeling came over him in regards to the mountains. They looked so familiar, but he had never seen them before. The contours of the mountains and even the shape of the snow on them all seemed to correspond with a memory, but how could that be?

It was also the smell of the meadow that overwhelmed Scott. Finally taking his gaze off the mountains, he then looked at the tall grass gently swaying in the breeze. The sound of babbling water coming from the stream seemed to take over his hearing. Scott just stood there in the meadow mesmerized by the feelings that were washing over him. Slowly, he knelt down and touched the tops of the grasses and wildflowers. He did not pull at them, but rather just gently waved his hands over them. The smell of horses suddenly entered his thoughts as the breeze changed. Then, a bluebird began singing from atop a tall pine tree on the other side of the stream.

Scott tried hard to understand the feelings he was experiencing, but they just did not make sense. He sensed that he had been in this exact spot before, but he was a different person when he was there. But something made this spot special to that other him. Scott tried hard to feel what that special-ness was, but he could not identify it. So he just luxuriated in it, imprinting it on his memory. Someday he would be on land that felt like this again. Listening to the babbling stream, Scott felt like he was about to be transported to that time, but then someone shaking his shoulder brought him out of it.

It was his sister, “Where have you been Scott? Mother’s been looking for you. What were you looking at?”

“Nothing!” replied Scott emphatically. He got up and turned around to walk back to the gas station, ignoring his sisters repeated questions.

Just then, Scott’s mother came around the corner of the gas station and saw Scott and his sister walking back. She immediately began hollering, “Will you get back here right this minute! What on earth do you think you’re doing, Scott? What did I say about wandering off? Will you hurry up!”

Scott and his sister began running. They headed straight to the car. The rest of the family were in their seats ready to resume the trip. Scott’s mother was still blabbering on, but Scott had tuned her out. She was saying something about getting to Wichita by sunset. The fight for the window seat was a quick one, with Scott winning. As the 57 Chevy left the gas station and re-entered the highway, he stared at the meadow and the mountains as they came into view. After they passed the meadow, Scott continued staring at the mountains, enjoying their every feature, until he could see them no more.

Twenty-four years later a brown station wagon pulled into that very same gas station. A woman and a six year old girl got out of the car on the passenger side, and they both proceeded to the restrooms. Getting out of the driver’s side, a thirty-five year old man got out and went inside the station to pay for gas. He soon was back outside and putting gas into the car. Locking the gas nozzle open and pouring, he then stood up and looked at the scenery all around him. The mountains were so beautiful with their white crowns standing tall above the forested flanks. The air was so fresh, with the smell of grass and pine trees and horses. Breathing the air deeply into his lungs, the man was invigorated and overcome with a sense of deja vu.

When the gas was pumped, the man went to the restroom. His wife and daughter were still in the girl’s room. Relieved, he came out of the restroom and took another swig of mountain air. Noticing his wife and daughter getting something out of the back of the station wagon, the man wandered around to the side of the gas station. As he saw a peaceful grassy meadow with a babbling stream running through it, he stopped in his tracks as he was overcome with an intensely peaceful feeling. As he saw the snow-capped mountains behind the meadow, chills raced through his body. He had been there before!

The man looked intensely at everything trying to bring back his memory of the place. It was a memory lost deep in his memory banks; one that he had not retrieved in a very long time. He was on the verge of tears as he was overcome by the beauty of the place and the very strong feelings the place evoked. Suddenly, the sound of the babbling stream seemed to take hold of him and he felt the memory of the place rise to the surface of his thoughts. As wave after wave of joy rippled through his being, the man shed a tear.

And then he heard his little girl’s voice yelling, “Daddy!” His reverie broken, the man wiped his tear, then turned around and waved at his daughter. And then he saw his wife come up behind his daughter and also wave at him, yelling, “We’re ready to go, Scott!”

Copyright by White Feather. All Rights Reserved.
Excerpted from the book, Alimaka Stories