The Pleiades and the Dead Zone 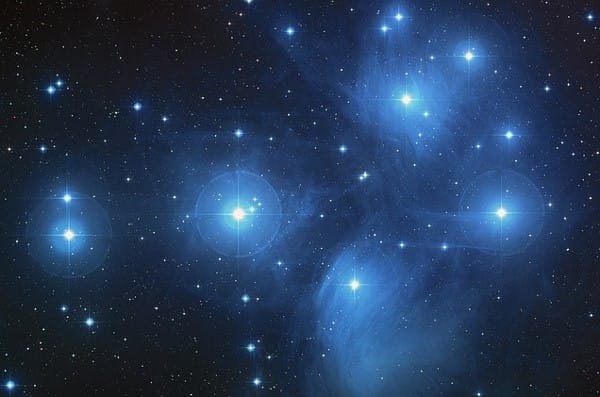 Between lives we can travel all over the place because, being non-physical, we are not bound to earthly physical embodiments. Every physical location has a corresponding non-physical location. The Dead Zone is an incredibly vast place just like the physical reality we are in. Travel, however, is much easier.
Between lives many of us have visited the Pleiades. It is a place that is very much as described by various Pleiadian channelers. In the Dead Zone we create through thought. Through collective thought, places are created in the Dead Zone where souls congregate to pursue certain gestalts, or collective coagulations of thought. In the Dead Zone there is a place called Heaven where souls gather to study and pursue Christian ideas. There is also a heaven there for Muslims and other religions. There are also various hells in the Dead Zone.

All religions have their roots in the Dead Zone! They are formed in these Dead Zone locations where the various gestalts are imprinted on our non-physical beings and then when we are born into physicality we act out the story lines of these gestalts, thereby making them physical and bringing them into the physical realms. Every gestalt has a story line, the acting out of which brings forth the understanding of that gestalt.

By the way, the introduction of the Christian gestalt/Jesus story line into physicality was also aided by the channeling of information from that gestalt by humans. Those humans were called prophets or apostles or whatever and their channelings were written down in a book and set in stone, forming a foundation of dogma from which the gestalt could grow in the physical. These humans were channeling directly from the location in the Dead Zone where the whole Christianity gestalt/Jesus story line originated. And, as with any channeling, there is always at least a slight bit of distortion.

Now, we can say the same thing about the Pleiadian gestalt. Those channeling the Pleiadian information are channeling from the non-physical location of the Pleiades in the Dead Zone--a very real, but non-physical, place, just like the Christian Heaven and other Dead Zone locations. The Pleiadian gestalt is different than the Christian gestalt and it is different than the Muslim gestalt and all the various other gestalts that have been carried over from the non-physical into the physical. Gestalts are just coagulations of thought and ideas and principles. They are neither bad nor good. We develop those thoughts and ideas in the non-physical and we bring them into the physical in order to experience them. Each gestalt is designed to broaden our experiences in our attempt to gain a wholeness of experience.

So all the gestalts and story lines being played out on earth are valid and they all have something for us to learn from. To judge any of them as "good" or "bad" boxes us into those judgments and impedes our expanding of experience. Some of us have already experienced certain gestalts and story lines and have garnered the wisdom contained in them and therefore have no need to relive the same gestalt and accompanying storyline. So we move on to other gestalts and storylines and when we are finished with them we move on to others. There are plenty to choose from.
*****
One of the things that I do not care for about the Pleiadian agenda is the obsession with the number 12. This shows that they are of the 12:60 vibratory time harmonic. And that is not bad! By the way, that is something that the Pleiadian gestalt and the Christian gestalt have in common; they are both based on the 12:60 vibratory time harmonic. The physical earth dimension for the last 35,000 years, however, is based on the 13:20 vibratory time harmonic. So both the Pleiadian gestalt and the Christian gestalt are in dissonance with the natural physical earthly vibratory time harmonic. Like I said, this is not necessarily bad, in fact it may have been necessary to tweak us enough to accelerate our evolution.

By the way, without the Dead Zone and those in it we would have no atmosphere surrounding our planet.

(And, of course, that is just one way of looking at it. It is not an absolute fact. I do not care for facts much because they box us in. In our exploration of information and experience we tend to want to label something a "fact" so then we no longer have to continue exploring. Once something is labeled as "fact" or "truth" we stop searching for more information and experience. So I do not care much for facts or truth. I want MORE. I do not want facts and truth to stop me and I would hate for anyone to label anything I say as fact or truth. Go beyond it and look for more. As I have said many times, my favorite spookism is this oxymoron; "The only absolute truth is that there are no absolute truths.")

I also want to reiterate that just because something comes from the Dead Zone does not mean it is bad--or good. It is merely information coming from the non-physical reality that overlays our physical reality. What we do with that information in the physical we can also label as good or bad but those are just labels and judgments which prevent us from seeing the bigger picture.

And yes, the Dead Zone does help explain prophecy. Most major mass events like war and conflict and religious story lines like the Jesus story line were first plotted and strategized in the Dead Zone before being implemented in the physical. So if we can tune into that "blueprint" we can predict the outcome although we will never be perfectly correct because the physical re-enactment is never exactly the same as the blueprint thanks to silly little things like human free will. It is always a little different.

Anyway, Edgar Cayce worked with his non-physical spirit partner Michael. Michael is who provided much of the information in the Readings. The Readings stated repeatedly that this Michael WAS NOT an angel or archangel. He was just someone who had worked with Cayce numerous times through several lives providing information from the Akashic Records located in the Dead Zone. At other times, Michael was in the physical and Cayce was in the non-physical providing Michael with information from the Dead Zone. They traded places. Anyway, they were plugged into the Christianity gestalt/Jesus storyline. Jesus was a buddy of theirs. The way I see it, the Edgar Cayce Readings were the culmination of that working partnership in regard to the Christianity gestalt/Jesus story line. When Cayce died in 1945 he went into the Dead Zone and began studying a new story line that was being prepared to be introduced into the physical. If and when he "comes back" he will be plugged into the gestalt/blueprint of that new story line rather than the old Christianity gestalt/Jesus story line. Of course, that is just my whacko opinion. Those in Virginia Beach would surely disagree.