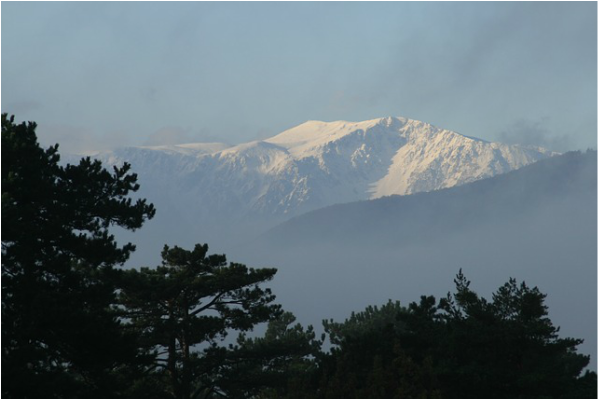 On a cold winter's night Allen returned to the mountains where he grew up. It had been over twenty years since he had been there. He arrived at his old home just as it began to snow. Parking his rent-a-car, he went up to the front door. He knocked.

It was so strange to knock. He had lived there for eighteen years and had never knocked before. It had been his home. He never realized how solid the oak front door was. It hurt his knuckles to knock but after a moment without anyone answering he knocked again.

From the day two days after he was born and was brought home from the hospital until the day one month after he graduated from high school he had lived in that adobe house with his family and had never knocked on the front door. And this was the first time he was back. He was now in his forties.
Both of his parents were now dead. His brother was in prison and his sister now lived in New Zealand. He vaguely knew the people who bought the house. Just before he left the area "for good" he had met them at one of his parents' parties.

Allen's parents were hippies, or at least that is how he always considered them to be. When they threw parties at least a hundred people would show up, and so would all of their children. There would always be a bonfire and plenty of musicians. There was a party on every solstice and equinox and numerous times in between. And there was always a plethora of drugs. The property reeked of marijuana smoke during those parties and there were mushrooms and cocaine and plenty of booze. While the musicians jammed people danced. A bounty of food was served and the barbeque pits sizzled through the night.
Whenever there was a party the guests would separate into three distinct groups. There were all the adults; the hippies, who played music, danced, did drugs and talked loudly and incessantly. Then there were the small children who congregated in small children play. Mothers would take turns vaguely overseeing them. The small children seemed to have the most fun of all.

Then there were the teenagers. The teenagers would sneak off into the surrounding forest where they would find a place to sit around with each other and talk and share joints they had stolen from their parents. While their parents and younger siblings partied, the teenagers discussed serious subjects, even in their stoned state. They shared their angst, their fears, their ambitions, and their developing opinions. They shared their dreams of a world that evolved beyond the demarcations of society they saw around them.

They felt they could create a better world. But they also felt powerless in knowing how to do this. All they knew is that they wanted to be different from their parents. They realized that their parents were very different than normal parents but they wanted no part in either their parents' world or the normal world. They fantasized about something different but now, so many years later, Allen realized that most of them fell into the same patterns of their parents or the rest of society. In the ensuing years they all seemed to have gone through the same things. That new reality that they fantasized about and talked about never happened. Having kept up with several of those fellow teenagers, Allen knew that nothing seemed to have changed. They all seemed to follow in their parents' footsteps or stepped into equally non-progressing roles.

As Allen knocked again on the hard oak door he thought about Linda. Linda's parents never came to the parties at Allen's house. They were straight-laced. Her father was a preacher and her mother was a strict housewife who kept close tabs on her children. But occasionally Linda would be able to sneak away and come to the parties. Allen had a very serious crush on her. She was beautiful and innocent and it was like poetry when she spoke. Allen desperately wanted to lose his virginity with Linda but she would never let it happen although they came very close.

Once, they had snuck off into the forest together and had smoked a joint together. They laughed and bared their souls to each other. They kissed and fondled but suddenly she reacted harshly and insisted on going back home.

Linda never talked to Allen again. Two years later she died of a heroin overdose. Now, so many years later, Allen still did not understand what happened with her. He carried the confusion with him still after all these years.

Remembering all those teenagers he hung out with during those years so long ago, Allen realized that not a single one of them became successful. A wave of guilt washed over him as he realized that he was the only one to attain any measure of success. He was a musician and had recorded some albums that sold. They never made it to the Billboard Top 40 but he actually was able to make a modest living for several years before he took a well-paying job that secured his economic well-being. For at least several years he had lived his dream and he was proud of that. Although he had lost track of several of those teenagers from back then, none of the ones he had kept up with had lived up to the fantasies they all shared in the forest so many years ago.

Allen knocked on the oak door yet again. If it was still his parents' house he could have just opened the door and walked in or at least gone around to the back. His parents had never locked the door. That was not the hippie way. Everything was open. People were always coming and going through his home when he was growing up. When he went from one room to another in his home growing up he never knew who he would encounter. Allen wanted to turn the doorknob and enter but knew that was not right, so he knocked yet again.

Tears welled up in his eyes but he would not let them flow. He had traveled a long way to come home. He wanted to reconnect. He wanted to know that the childhood he remembered was not some passing illusion. He wanted to connect to the place where it happened. He wanted to feel it again even if it no longer existed. He wanted to be able to release it all.

He knocked again. With no answer, he put his hands in his pockets for warmth and turned around to look at the snow, which was now falling quite heavily. He suddenly realized that the snow was no different than the snow he remembered from his youth.

Turning around back towards the oak door to his childhood home, he was about to knock one more time but decided against it. What was the point?

Allen walked back to his rent-a-car and got into it. Turning around, he left his past and proceeded to the two-lane highway leading down from the mountain. As he drove down the mountain his windshield wipers could barely keep up with the falling snow. The tears gushing from his eyes made it even more difficult to see where he was driving.

When he was a teenager, Allen and his friends would play games to see who could drive down the mountain the fastest. While Allen won a few of those contests he now drove slowly and carefully. When he got down to the valley below, the snow had turned to rain and while his windshield wipers fought the water, Allen's eyes had dried up.

Soon, he was on an airplane flying home.