The Best Ice Cream of All Time 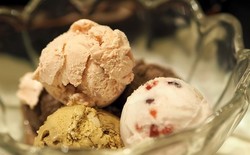 Brandon left the hospital a new man. He was weak and had lost over seventy pounds. Only five of those seventy pounds were removed in the surgery. The doctors took out a huge tumor that weighed five pounds but the other sixty-five pounds were lost is his body's battle against that tumor. He walked out of the hospital under his own power, with one hand holding up his pants which were now suddenly six sizes too large. His belt did not have enough holes to keep his pants from falling down. His other hand held a paper sack full of the few things he had entered the hospital with.

When he got in the cab the driver asked where he was going. Brandon gave the directions to his apartment but asked if the driver would first stop at the local ice cream parlor. "I've got a craving for ice cream," he said in explanation.

"Sure," replied the cabbie, who had a toothpick in his mouth, "Baskin-Robbins or Mama Juju's?"

Being new in that town, Brandon asked, "Which place has the most fattening ice cream?"

The cabbie, a rather portly fellow, replied, "That'll be Mama Juju's. You can gain weight just driving into their parking lot." He laughed through his toothpick.

"That'll be perfect. I want to celebrate."

As the cabbie pulled out onto a four-lane highway, he asked, "So what ya celebratin'?"

The cabbie was silent for a moment as he chewed on his toothpick. Finally, he turned his head sideways without actually looking back at Brandon in the back seat, "Right on."

On the way to Brandon's apartment the cabbie asked, "So, uh, excuse me for asking but you got over cancer?"

"Wow, I guess the medical establishment is making leaps and bounds, huh?"

"No," replied Brandon. "It had nothing to do with the advances of medical science."

Brandon was looking out the window at the passing scenery which suddenly seemed so beautiful after having spent five weeks in the hospital. Turning to look at the side of the cabbie's face, he answered, "I simply decided that I wanted to live. The doctors wanted me to stay and make them rich but I was done with all that. I was done dying. I simply made a decision to live."

The cabbie was silent. His toothpick stopped moving.

When they arrived at Brandon's apartment, Brandon asked the cabbie, "How much?"

Brandon reached into his paper sack. Inside was eighteen dollars--all the money he had left to his name after buying the ice cream. He handed the cabbie three five dollar bills, "Keep the change."

The cabbie was now completely turned around facing Brandon. He took the toothpick out of his mouth. He handed Brandon back two of the five dollar bills, "Here, the rest is on me."

Brandon refused the money, "This is the best cab ride I've ever taken in my life. I insist you take the money. You earned it."

As Brandon got out of the cab, the cabbie put the toothpick back in his mouth and scratched his head.
Holding his paper sack and the ice cream in one hand and holding his pants up with his other hand, Brandon went into his apartment where he immediately put the ice cream into the freezer.

He then went into the bathroom and took off all his clothes. Looking in the vanity mirror above the sink, he saw a grizzly sight. It had been over five weeks since he had shaved. But he could not be bothered with shaving....not yet. He stepped into the shower and took a very long, hot shower. It was one of the best showers he had ever taken.

After toweling himself off after the shower he walked into his bedroom to get dressed. Before he could pick out a single piece of clothing he saw himself in the full-length mirror next to the closet. He stopped as he was shocked.

When he went into the hospital he weighed 180 pounds and just before he left he weighed 110 pounds. Now, for the first time, he could see the result. As he stared at his naked image in the mirror he realized that he could see all of his ribs protruding through his skin. He could see his hip bones and collar bones and bones he had never seen before. He looked like a walking skeleton. At first, he was in shock. He looked like someone who had just gotten out of Auschwitz. He had seen pictures of concentration camp survivors before and looking at his naked body he gasped as he realized that is exactly how he looked.

Brandon stared at his naked body for a very long time. The shock slowly started wearing off. The doctors had surgically removed a five pound tumor from his body but with that tumor they also removed a lifetime of issues. They took away so many of the problems that plagued Brandon. They removed his pain and his sorrow and his regrets and his anger and his guilt and so much of what he was personally unwilling to release.

Slowly, Brandon began to smile. Like the Auschwitz survivors, he was now suddenly FREE. For the first time in a long time he felt happiness.

Finally, he proceeded to get dressed. His body looked frightening but he now suddenly loved it more than he ever did. He felt like most all of his burdens had been released. He felt clear, empty, happy, and unburdened.

His belt did not work to hold up his pants so he got a piece of rope that he cut to use as a belt to keep his pants up. "This won't last long," he thought to himself.

It was the best ice cream he ever ate in his life.