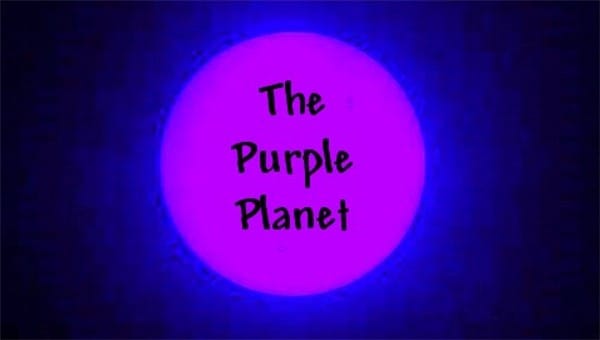 But first they just watched this other universe very intensely to see just how it worked. Although the activity was high in this other universe, the ideas coming out of it were nothing new and did not satisfy the Gods craving for newness.

Upon entering this other universe, this God looked for the busiest place in that universe. It turned out to be a little purple planet near the outer reaches of that universe. This planet was buzzing with activity. It was populated by a race of creatures with physical bodies that resembled fish, but they did not live in water, but rather in the atmosphere of the planet.

These fish-like creatures had huge cities in the air above the planet. They did not seem to be doing much other than swimming around through the air. Why were they so busy, yet they seemed to accomplish nothing? The God looked into the minds and hearts of these creatures and learned that they had no goals or aspirations or expectations and cared for nothing else but swimming through the air.

Well, swimming was nothing new. There was some kind of swimming going on in just about every universe. Then he looked at the other life forms on the planet and it noticed that they all had something in common; something that was different from the fish-like beings. Every other creature was attached to something and had no freedom of movement. There were plants and animals on the surface of the planet but none of them moved. They all seemed to have roots or something holding them in place. It was obvious why the fish-like creatures were the dominant species because they were the only ones who could control their movement. But, interestingly, the fish-like creatures did not rule over the stationary creatures, in fact, they seemed to ignore them completely.

Still, freedom of movement was nothing new at all, so the God continued searching for something original. It finally gave up and decided to go back to its own universe, but when it tried to leave, it realized that it could not get out of the planet's atmosphere. It was stuck!

After trying to get out for a long time, to no avail, the God decided to stay and see if it could find some answers.

So it made itself at home on this planet and mingled with all the species. When it talked to some shrubs on the surface of the planet, it found out that the shrubs were holding on for dear life to the surface because they were afraid they would go floating off into space if they let go. The God laughed, saying, "Oh, you silly shrubs. I am a God and I cannot get out of here. Don't you realize that you could be just like the fish-like creatures and float around blissfully in the atmosphere and never go floating off into space?"

The shrubs were shocked. They explained that the fish-like creatures to them seemed like Gods, and that only they could float through the air.

The God told the shrubs that it was only their beliefs that kept them from doing what the fish-like creatures were doing. It said that they, too, were Gods and if only they would let go of their fears and of the planet's surface that they, too, could enjoy life floating around through the air.

The shrubs found this hard to believe, but a few brave shrubs decided they would give it a try and they let go of the surface of the planet. Sure enough they started to float up into the atmosphere. After they got to a certain height, they no longer kept going up, but rather stayed at that altitude and began floating on that level. Soon more shrubs tried it and they, too, were able to float in the atmosphere without falling away into space. Before long, shrubs were floating up into the air all over.

The God was pretty proud of itself for enlightening the shrubs, but soon the God was thumped on the head by something falling out of the sky. It knocked the God to the ground, and when it got up, it realized that it had been hit by a falling fish-like creature. Before long, there were fish-like creatures falling from the sky all over the place. The fish all appeared to be dead. The God was very puzzled. Afraid that it had set off a chain reaction, the God tried to stop the shrubs from floating up into the air, but it was too late. The shrubs were deliriously happy with their newfound freedom of movement. As it began raining dead fish-like creatures, the God had to take cover in a cave. It was in the cave that the God met a creature he had not seen before.

"It is raining dead fish-like creatures out there. Are you not concerned?"

The snake-like creature continued laughing, but finally replied, "What's the matter? Afraid of something new?"

The God was taken aback by this and had to think a moment. "Well, no, in fact, that is why I came here; is to find something new."

The God was left silent by this. The snake-like creature had a point. And then the God remembered his fellow Gods back in the universe from which he had come, and suddenly wanted to get back home to share what he had learned. But he remembered that he was stuck on that planet. After clearing his throat, he asked the snake-like creature how he might get off the planet.

"The shrubs? Why ask them?"

"Because they are in possession of a secret that someone recently told them of."

"Who told them this secret?"

"You did," replied the snake-like creature.

"But I want to leave the planet. I told the shrubs they could swim through the atmosphere without leaving the planet."

"Yes," snickered the snake-like creature, "and they believed you."

* * * * *
Copyright by White Feather. All Rights Reserved. Excerpted from White Feather's book, The Whooping Crane Saga and other Stories