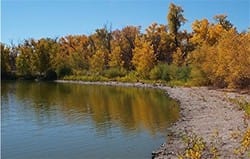 She walked away from it all. She walked out the door, letting the screen door slam shut behind her. She walked down the gravel pathway towards the road. Once on the road she kept walking and walking.
She finally came to the turnoff leading down to the lake. Everything that had happened back in the trailer had suddenly left her. Her mind was blank. Through her walking she had released everything in her life--at least for the moment.

Walking down to the lake she suddenly started feeling better. She took in the entire scene; the blue lake, the green hills on the other side of the lake, the fishermen standing on the lake shore with their fishing poles, the handful of screaming children chasing each other along the shore, the families sitting in their lawn chairs with their cans of beer sharing stories, the dogs chasing the children, the geese floating leisurely on the lake, the men standing next to the barbecue pits turning their meat, the teenagers playing Frisbee...

She kept walking towards the water's edge. With each passing step she felt emptier and happier. Her muscles relaxed now that they were free of the tension that filled her home. The sound of birds now replaced the reverberating sound of the television that was constantly on in the trailer. The smell of the pine trees now replaced the collective smell of the trailer and the gravel under her feet now suddenly seemed more comfortable than the worn and stained carpet of her living room.

They had surely come out of the trailer looking for her. Or had they? Maybe they did not even care. Maybe they had not even noticed that she was gone......

Coming close to the water's edge she picked up a rock and threw it into the water with all the fierceness that she could muster. She picked up another rock and another and she threw each one into the lake and with each rock she threw she released a part of the tension that had been crippling her for months.
She kicked off her tennis shoes and walked into the water; not far, but far enough that the water came up to her knees. She let her tears flow. They poured down her face and after a few moments of crying she thought that she actually heard one of her tears plop down into the lake.

With this her tears stopped. She seemed suddenly empty. There were no more emotions to release, no more grief to dispel, no more regret, no more guilt, and no more pain. All she now heard was the birds flying about and all she felt was a deep connection to life. It was like she had stepped into a whole new world.

And then she realized that it was not a whole new world. It was the world in which she lived; the world she had been cut off from by the drama she had been engulfed in.

Noticing the birds, both the ones in the air and the ones floating on the lake, she realized that they lived in the same drama every day but none of them seemed stressed out. How did they do that? How were they not embroiled in the drama of everyday life? Why did they not want to run away? How did they coexist with a seemingly chaotic world around them and remain in a state of peace? Why were they not throwing rocks into the lake?

Just as the tears on her face had dried she suddenly started crying again. This time, though, the tears were tears of joy. This time the tears resulted from the deep connection with life that she now felt. While the nature around her continued on without any stress, she realized that all the stress she had felt resulted from a lack of true connection to the totality of the world she lived in.

With tears of joy streaming down her cheeks, she turned around to see many people lining the shore all looking at her as if ready to jump into the water to save her. Walking back through the water to shore, she laughed. Everyone stared at her open-mouthed as she put on her shoes and walked home.