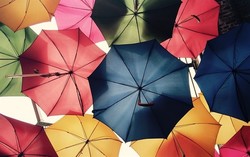 A very dear friend of mine who lives in the rainy Pacific Northwest reported recently that her umbrella was stolen. That may not seem very tragic unless you live in the Pacific Northwest where, at certain times of the year, it rains incessantly.

(If it does not make me weird there are plenty of other things that do.)

I thought about my friend's umbrella yesterday while I was out for a walk. Yesterday was a dark, gray, gloomy and rainy day. The sun never came out. I happen to be a very solar person. I need sun every day--and that is why I could not continue living in the Pacific Northwest. Here on the Great Plains those kind of sunless days are rare but we have a few of them each year. Yesterday was such a day.

I remember that winter that I lived in Washington State. At one point we went 42 days straight without the sun ever coming out. That was the closest I have ever come to losing my marbles. On the 43rd day the sun finally broke through the clouds. I happened to be walking downtown when it happened and I stopped walking, closed my eyes, and put my head back so that my face could absorb those life-giving solar rays. Then I looked around and realized that other people were doing the same thing. I noticed that people who were indoors came out onto the street just so they could experience the sunshine. Twenty minutes later the sun was once again behind clouds and we did not see it again for another week. (That was when I decided to move to the American Southwest where the sun shines continuously.)

So I went for a walk in the cold rain yesterday (if it had been about 8 degrees colder it would have been snow) and it felt like I had been teleported to the Pacific Northwest, which made me think of my friend and her stolen umbrella, which made me think about how less wet I would be if I had an umbrella. But then, if it stopped raining, I would have had to carry it around with me. I prefer to travel (walk) as lightly as possible. If I stopped somewhere for something I would have to put the umbrella down and it could get stolen or I could forget about it and leave it behind.

That is when I realized that umbrellas are to rain what sunscreen is to the sun. I never, ever wear sunscreen. Why would I deprive myself of the powerful, healthy and energizing rays of sun? And why would I put all those toxic chemicals on my skin only to be absorbed into my body? I am not afraid of the sun.

Well, I am not afraid of the rain either. I tried to clear my noggin of thoughts and just enjoy the cold water pouring out of the sky as I walked. I released all resistance to it and enjoyed it as it drenched me. I could not have done that with an umbrella.

It would have been nice, though, if I had windshield wipers on my glasses.....