Walking Through the Fog Without Sticking My Thumb Out 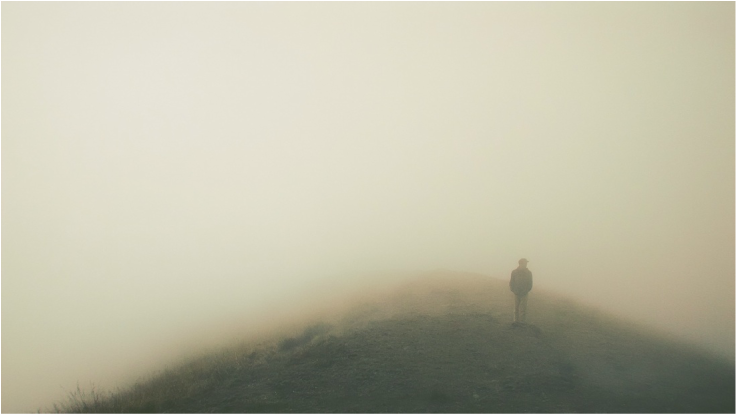 Yesterday morning we had thunderstorms at 8:30 in the morning. I’ve seen that happen before but it is not a common occurrence. Around here, thunderstorms usually happen in the late afternoon and evening.

This morning was different in a different way. After getting out of bed and putting my glasses on I looked out the window and was shocked to see a very thick fog. I could barely see the house across the street. Fog is not very common around here. What a delightful surprise!

As is my custom at this time of year, after putting on my glasses, getting dressed and urinating, the first thing I do in the morning is go outside for a short predawn walk. I want to connect with the paradise that is our world before my brain gets into gear and starts thinking a lot. I've found this to be the very best way to start one's day--at least during those times of year when it's not 5 below zero outside at that time of day. It's a time of day when bunny rabbits are scampering about everywhere and birdsong is at its peak. Some people need coffee first thing in the morning. I need birdsong.

What a sensational thrill it was to take my predawn walk through a thick fog! That is not something I can do very often. It's like I went to sleep last night on the Great Plains but awoke this morning in a completely different geographic location like Washington state or Maine or London or some other foggy place. It was almost surreal. And I noticed that the birdsong was subdued. I don't think it was because there were less birds but rather because the air was so thick with fog that all sound was softened. I wonder if that is why foghorns are made to be so loud. Because the sound has to penetrate such thick air?

It was a positively fantastic and empowering little walk but I was soon back inside my apartment drinking my morning lemon water. I wear flip-flops for my predawn walk because I don't want to take the time to put on real shoes. I want to get outside as quickly as possible. But as I stood with my glass of lemon water in hand staring out the window I realized that my short predawn walk just wasn't enough. How many times do I get to take a walk through fog? I wanted more. So I decided to put on my tennis shoes and go for a real walk.

I was quickly back outside walking. I had no idea where I was going and just let spirit direct me. I soon realized that I was headed in a southwesterly direction.

I ended up walking for about an hour and a half. I'm not sure if I should call that a long walk, a medium walk or a short walk. It's all relative. Most of my relatives would consider that a marathon. Some people's relatives would consider that an average-sized walk. The relatives of the Kalahari Bushmen of southwest Africa, who will walk fifty or sixty miles in a day, would probably consider it to be a short, wimpy walk. Like I said, it all depends on your relatives. For me, it was a comfortable medium-sized walk.

I eventually realized that I was headed toward some prairie. That may seem like a silly statement considering that I live on the prairie of the Great Plains. But, although my specific geographic location used to be endless prairie, it no longer is. I live in a small city (or town, depending on one's relatives) and that patch of urban sprawl is surrounded by a seemingly endless sea of agricultural fields. It looks nothing like it did a few hundred years ago. But I know of a small patch of natural prairie just southwest of town. It's an extant swath of the natural short-grass prairie that existed before the White Man showed up. The grass is actually about a foot tall and some relatives might consider that to be tall but it is short in comparison to the tall-grass prairie that used to exist to the east of this area where the grass will get three or four feet tall. Except for the scattered trash, it looks just like the prairie that the buffalo roamed before Whitey almost wiped them out.

So I walked to the edge of town then walked along a country road that ran alongside of this natural patch of prairie. On one side of the road were agricultural fields and on the other side was this natural prairie. The prairie covers quite a few acres of softly undulating land. I've gone there several times before. I would look out over the treeless prairie and pretend that I didn't see the buildings and farms in the distance on the other side of this natural land. This gave me the feeling of being on the land in the times when the only humans around were Native Americans. I've learned that, while this type of land might seem bleak, it is actually teeming with life. I've learned that there is great beauty--and plenty of mojo--to this prairie.

Well, when I got out to the prairie this morning I didn't have to pretend that I didn't see buildings or farms in the distance. Thanks to the fog, I really couldn't see them. With my back to humanity, I could stand there looking out across this near-pristine prairie and see it as though I had teleported across time to the prairie of three hundred years ago. It was fantabulous!

I quickly realized that there was an enormous amount of bird activity going on. Countless birds were hovering in the air no more than six to ten feet above the ground. They would suddenly dive-bomb down into the grass and then fly back up. There must have been a lot of bugs out in the grass because the birds were obviously feasting. They were also screaming with joy at the top of their little lungs. What a delightful cacophony! It was breakfast time for birdies on the prairie. I stood and watched for some time. I then thanked the birdies and the bugs and Mother Nature and headed back towards home. Boy, it sure is wonderful living in paradise.

As I walked I took a Kleenex out of my pocket to clean my glasses. It wasn't raining but my glasses were wet as though it was. That's how thick the fog was.

I had only been walking back home for a short while when a pickup truck driving on that country road stopped alongside me. As the passenger side window came rolling down I could see an elderly farmer wearing bib overalls and a cowboy hat. He had a toothpick in his mouth. "You need a ride?" he asked.

Furrowing his eyebrows, the farmer looked at me like I was from California or something. (Around here, the word, California, is officially used as a derogatory term.) Without saying anything, the farmer proceeded onward, the passenger side window of his truck slowly closing.

"Man," I thought to myself. "Just last week I was walking home from Wal-Mart carrying six bags of groceries and it started to rain. Scores of cars passed by me and no one stopped to offer me a ride. I would have gladly accepted a ride then. Now I'm walking for pleasure and someone stops. What a whacky world."