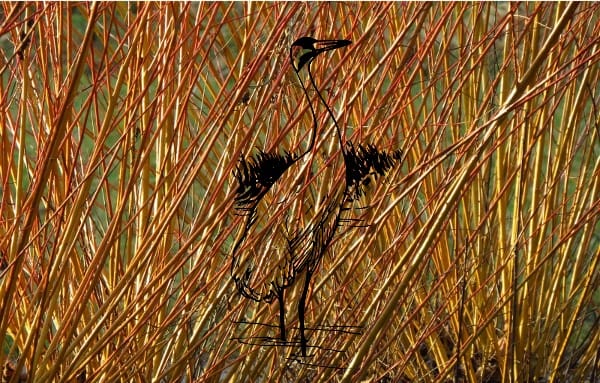 I was a little boy no more than nine years old. I was down by the river collecting willow branches for my mother and aunt and all the other women of the tribe. I was supposed to be with two other boys, but they did not like me so I went my own way. The two boys made fun of the fact that I was different. They taunted me, but were actually very afraid of me, for they would never stand up to me when I stood up to them. I rarely stood up to them, though, because they just were not worth the effort.

I knew where the best willow branches were and I went straight to them. I knew just the size and age of branch that the women wanted, and I went right to the perfect ones, cut them, stacked and tied them, and laid them out on the ground to make my prayer before those other boys ever even found any willows.

I then proceeded to do one of my favorite things in the world. I sat down in the soft sand alongside the river — just an arm’s length from the water — and I began to talk to the Great Mother. I thanked her for being my protector in this strange land. I blanked out all thoughts and sounds and listened to the music of the river, of the recurring gurgling sounds of water washing over rocks. It was a sound that always led me home to the Great Mother.

I was about to ask the Great Mother for some special help when my reverie was suddenly interrupted by a great rustling of feathers behind me. I jumped up in a start, turning around as I did so. There, just two arm lengths in front of me, was a giant white bird that had just landed. At first, I was startled by this magnificent white crane, but then in an instant I realized that she was the Great Mother. I was overcome with the most intense love that could ever be felt. I could not stop the tears from running down my face. I was overcome with joy. I thought that she was coming to take me home.

“Nonsense, little boy,” said the crane, although I heard no words spoken. “I came to take you flying, little boy. Let us go flying.”

A sudden fear gripped me from head to toe. I did not know where it came from. I stuttered as I replied to the crane, “But…but I can’t! I…I’m just a boy. I can’t f…fly!”

The whooping crane said nothing, but I could suddenly feel an intense energy enter into my chest and go out to all parts of my body. My tears stopped flowing and the fear left me as though being quickly rinsed off me. I felt her say, “Let’s go.”

The Great Mother then took off in a mighty flapping of wings, and before I knew what was happening, I was flapping my arms and they turned into wings, and I was rising up off the land. I concentrated on the whooping crane and just tried to follow her. The sensation of flying through the air was so miraculous that I forgot any fear that I had had.

I followed the whooping crane as she took me high into the sky. After taking me through all manner of aerial maneuvers, I chanced to look down at my body, and it was then that I realized that I was a hawk. A whooping crane teaching a hawk to fly? I was confused.

In that moment of confusion I lost sight of the whooping crane and suddenly felt as though I would fall. With a sudden swoosh of air, the Great Mother flew by me and I once again reconnected with her. We flew and flew and flew.

Before I knew it we were landing on the soft sand beside the river where I had been before. I did not do a very good landing and ended up with sand in my eyes and mouth and ears. As I shook the sand off me, I heard my mother’s voice. I stumbled up and saw my mother and my aunt walking towards me. My mother was scolding me before she even reached me. Why was I alone and not with the other boys? Did I not know how unsafe it was for a child to be alone away from the tribe? Did I want to be kidnapped by scouts from that tribe that was at war with us? Did I want to die before I could grow up and make the tribe proud of me?

I never protested as my mother grabbed my arm and pulled me with her. My aunt grabbed the willow branches and managed to swat me with one of the loose ones. Following the women, I managed to turn around for one more look back, but I could not see any whooping crane.