Zen and the Art of Bowling 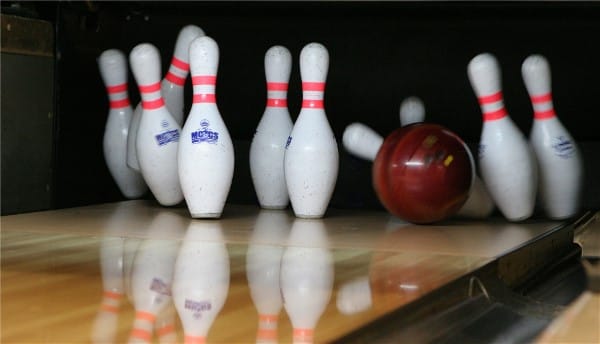 My dad was a natural born athlete. He excelled at every sport he played and sports were a big part of his life — at least the early part of his life. When I was a kid, my dad was always taking me, my brother, and my sisters either to the swimming pool, baseball field, or bowling alley. Sunday was “get the kids out of the house day” for my mom, so every Sunday our dad would take us to indulge in some sport. (He also, thankfully, took us to the library every Sunday.)

I once watched my dad run 12 racks in a row on a pool table. He probably could have run more but he quit without missing a shot. He was incredible. Baseball was his favorite sport — he was a pitcher — but he excelled at all the sports. He was a master horseshoe thrower, a good golfer, an unbeatable ping-pong player, and he was an extremely good bowler. So on many a Sunday our dad took us to the little 6-lane bowling alley on the military base. He tried to teach us a little, but mostly he just let us play. He would bowl, too, to keep himself in shape and his game up in the upper 200’s. In all his life he never bowled a perfect 300, but he came within a few pins on many occasions. If my dad bowled under 240 he was having a very bad day.

So we kids learned the basics and became bowling fools. But no matter how much we improved, we still seemed totally inept when compared to our dad. We asked him several times to tell us his secret, but he shrugged us off. So I watched him and tried to learn from that. When my dad bowled, it was with minimum effort. His motions were very fluid. He just went up there and threw the ball. He didn’t go through any of the machinations others do like concentrating hard and long before moving, taking on bizarre postures, or making exaggerated movements. He just went up there and threw the ball. And he got strike after strike after strike.

So one Sunday we were bugging our dad especially hard to get him to reveal his secret, when, to our amazement, he decided to tell us. He had us all go to the edge of the wooden bowling floor and look down the alley. He then picked up his ball and knelt down in front of us, holding the ball out before us.

And then he spoke, “This bowling ball is exactly one-fourth the width of the bowling lane.” He then stopped for emphasis, looking at us. We were looking at the ball and the alley behind it and mentally seeing the dimensions. After he remained silent for a long moment, we then looked at him. He then continued, “So how can you miss?” With this, my dad arose and put his ball back, and then sat down.

The four of us kids were left standing there with our mouths open. I know my younger sisters thought my dad was cuckoo. I could tell that my older brother’s analytical mind was working real hard on it, but I didn’t think he would get it. But I got it almost immediately. While my brother and sisters were looking for technique, my dad was talking more about a frame of mind one puts oneself in while bowling, as well as spatial sense. It was more a matter of stripping away technique and getting to the very nature of the act of trying to knock down pins with a ball.

Thinking back on it, I don’t think I could come up with a better way to describe it than my dad did. He was a Zen master, and my appreciation of that is enormous.